The Prestigious Vivekananda Kendra Institute of Culture (VKIC) Sanmaan 2014 was bestowed on Sri Birkha Bahadur Subba (Muringla) at a function held at the W.M. Auditorium in the VKIC premises on January 31 2014 in the presence of an august gathering. He was conferred the VKIC sanmaan this year for his contribution towards the rejuvenation of the Limbu cultural life, which has been under threat from various force. In his long and illustrious career, Subba succeeded in building a better understanding about the indigenous faith and culture of the Limbu community. He was among the pioneers to ensure that formal temples dedicated to to Tageraaningvaaphum. 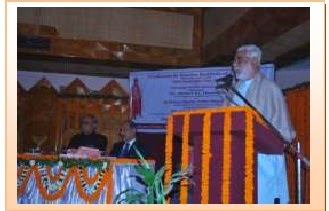 The Vice Chancellor of Gauwhati University Dr.Mridul Hazarika gave away the award that comprised a Seleng Chadar, citation, a plaque and a set of VKIC publications along with a cash component of Rs 25,000/- [Twenty Five thousand only] In his acceptance speech, BB Subba, expressed his gratitude to the VKIC and spoke about his work to preserve and promote the cultural heritage of the Limbu community, a group of people rich in tradition and faith. He said that inspired by his father he has been doing his best to serve society selflessly. Hence he was touched to receive the Sanmaan. Sustaining Dharma requires multi-level interventions, hence he has focused on language, folk songs and devotional music through which the masses could be reached. Programmes such as this ncreases the confidence of the people that selfless work bears fruits, he said.

In another highlight of the programme, senior scientist and former Vice Chancellor, Assam Agricultural University, Jorhat, Prof D.N Borthakur handed over a collection of his valuable books to the Suresh Chandra Rajkhowa Memorial Reference Section of the VKIC library. He said he had observed the rich collection of books at the VKIC and felt his precious collection would be put to purposeful use here.

Two publications VKIC – Its Vision by Mananeeya Sri P. Parameswaranji with its translation in Assamese and VKIC’s half-yearly journal Quest, with the focal theme Swami Vivekananda and His Message – Relevance for Northeast India were released by Dr. Mridul Hazarika in the function. Chief Guest of the programme Dr. Mridul Hazarika, emphasized the message of Swami Vivekananda who valued Indian culture and its immense contribution to the world. He said we have forgotten our values while keeping pace with our modern life. Commenting on the prevailing insensitivity in the society due to various global factors, he suggested that inculcation of values of Swami Vivekananda should start with children. The values of Swami Vivekananda are pragmatic in nature. Inculcation of values should be faster than erosion of values. It could be done through a platform like the VKIC, he said.

The Guest of Honour, Mananeeya A. Balakrishnanji, Vice President, Vivekananda Rock Memorial and Vivekananda Kendra Kanyakumari, reflected on the work of the VKIC and said that it was doing a wonderful task. He was appreciative of the quality of the Journal, Quest. In his speech he mentioned about the publication of VKIC, Aspects of Land Policy in Assam: Continuity and Change through which the message goes to the common people that Culture and Land goes together. He appealed to all the culture centres of north-east India to be associated with VKIC to form a greater platform for studying the culture commonalities Chairman VKIC, Dipok Kr Barthakur, earlier greeted the gathering and delivered the welcome address. He mentioned about the birth centenary of Eknathji Ranade to be celebrated in 2014-15. It was his vision to establish a centre to study the culture of Northeast of India.

The programme was rounded off by a scintillating performance by artistes of the Progressive Artiste Laboratory (PAL) from Imphal, Manipur. The group performed Nat Sankirtan and Vasanta Raas showcasing the rich dance heritage of Manipur. Nat Sankiritan a form of Yagya is a sublime religious art form of singing and dancing in the praise of the Lord accompanied by the playing of Pung (Percurssion instrument), Conches and Kartal (Cymbal). Traditionally, Raas performance is preceded by Nat Sankirtan which is akin to Purvaranga of Natyashastra. Its performance is considered the highest form of worship by the Vaishnavite Meiteis of Manipur.

It has been recently listed as an intangible cultural Heritage of Humanity by the Inter-governmental Committee under UNESCO. Vasanta Raas usually performed on the full moon night of Vasanta Ritu (April-May), depicted besides the aber-khel, the ultimate surrender of Lord Krishna to Radha’s immense love finally culminating in the union of the two or the Jugol roop  When the performance concluded with Aarti to the Jugol roop , the audience stood up in reverence and gave a standing ovation to the  artistes. Prof. AC Bhagabati, Member, Research  Advisory Council of VKIC, felicitated the artistes. Vivekananda Kendra Institute of Culture Foundation Day 2014 by Vivekananda Kendra