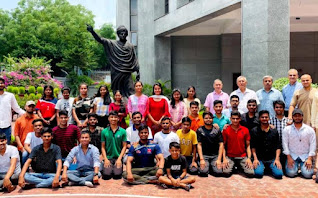 The Delhi Branch of Vivekananda Kendra Kanyakumari paid tribute to the great Yogi of 19th century Swami Vivekananda on his 120th Punyatithi.

Shri Nikhil Yadav, Prant Yuva Pramukh of Vivekananda Kendra, Uttar Prant, informed us that a 2 hours program was organized at our center in Chanakyapuri in which around 80 people paid tribute to Swamiji. The program started with a youth convention held every Sunday at the center, followed by a geet on Swamiji and pushpanjali with Bharat Mata Aarti. Then, in two groups, we studied the last-day incidences of Swami Vivekananda in the words of Sister Nivedita.

In the study circle, the youth discussed the need to apply Swami Vivekananda's ideas practically in their daily lives. 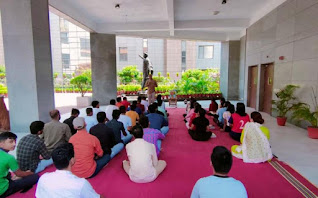 We are observing the 75th year of Independence, so it is important to know that Swami Vivekananda laid the foundation for the freedom movement, which inspired several freedom fighters.