APS at Kanyakumari: - Acharya Prashikshan Shibir would be starting on5th April at V.K. Kanyakumari. 122 Participants are expected from Andaman, Assam, Nagaland, Arunachal Pradesh and Karnataka. Shri. Shyamal Chakraborty, Dr. Rajendra Kakade, Smt. Swapna Borah have volunteered to be the part of the organizing team for this important event from VKVs APT.
at 2:24 PM No comments: 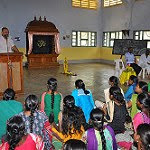 1.“Sri Rama Jaya Rama” Mantra was chanted during the Deepa Pooja and  Shivalinga Pooja and daily by our Balwadi school children, cultural class students and during monthly meetings by our Balwadi teachers and Social Workers.


Every month nearly 8,20,700 times mantras were chanted in 84 localities.
2. Through 76 Balwadis, 2,066 rural Children were nurtured.  In all the Balwadis, Malt along with hygienically prepared highly nutritive lunch with vegetables was served during the day. And in the evening vitamin-rich cereals were provided to the children.
3. In our Medicare Programme, 2115 patients were examined and treated for various common ailments, through 14 Rural Medical Centers in Kanyakumari, Nellai and Thoothukudi districts.
4. Eye camps were conducted at 3 places, in Kanyakumari, Nellai and Thoothukudi districts in which 893 were treated for their eye ailments and 158 were operated for cataract. 55 persons given eye drops and 73 persons given spectacles.
5. In 179 Samskara Vargas, 6,969 students participated.  The students were taught about the values of Indian Culture, through games, lectures & lessons.  The feelings of oneness were strengthened among participants, through patriotic songs and games.
6. Under Adopt a Grannie Programme, 24 destitute and old people were provided with monthly solatiums, in the form of rice, dhal, oil, etc., for their livelihood and 119 persons provided rice only, in Southern four districts of Tamilnadu.
7. Monthly Deepa poojas were organized in 234 village temples in five districts of Southern Tamilnadu, in which 10696 ladies participated and offered prayers for the welfare of self, family and the society.
8. Under Amrita Surabhi Scheme, our Kendra workers collected 974  Kgs of rice from five districts.
9. Through various branch centers, including Thoothukudi A.O. and book stalls, literature books were sold for Rs. 112,109 /-
10. 152  Vivekavani two years one  Subscriptions collected, 351  Patron were also collected.
11. 80 women are being benefited in 4 Self Help Groups in Kanyakumari district.
12. Yoga Varga has been conducted at 02 places,  Kovilpatti and  Aruppukottai in which 25 persons attended.
13. Swadhyaya Varga has been conducted at one  places,  Kovilpatti and  Aruppukottai in which 13 persons attended
14. 4 tailoring units are functioning well in Nellai & Kanyakumari districts with the total attendance of 81.
15. Shivalinga Poojas were conducted at 03 places in Kanyakumari District and 212 members participated.
16. Durga Pooja was conducted at 03 places, in Kanyakumari District in which 233 devotees participated.
17. Rural  Block level competition was held in one district Total No.of. competitions - 7,  Schools - 31, Students -468, Parents - 4, Teachers  - 29
18. Rural  District  level competition was held in three districts Total No.of. competitions - 6,  Schools -257, Students -1257, Parents - 289, Teachers  - 204
21. ECO camp was conducted in Tenkasi 120 students participated.
22. VACS College Girls camp conducted at Kanyakumari from 03.02.2016 to 06022016. 162 students from 22 schools 9 parents & teachers participated in this camp. In concluding programme Joint General Secretary Shri. Previnji blessed the students.
23. Personality Development Camp conducted at Courtalam in Nellai District and 50 students participated.
24. Grand Anna Pooja programme held at Rameshwaram – Vivekananda Vidhyalaya, Swami Saradhananda and  “Vivekavani” editor N.Krishnamoorthiji attended and blessed the participants. Nearly 4800 kgs rice collected and 400 participated in the programme.
25. Mathru Pooja & Anna Pooja held at Mudiveeranpattinam – Ramnad district 1250 rice collected 350 participated
26. Swami Vivekanandar Vizha conducted in five districts at 17 places 3454 participated.
This month, we have distributed the rice which was collected through Amrita Surabhi and Anna Pooja   to Balwadi children, old poor people and the institutions as mentioned below:
1.  Mounagurusamy madam, Thootioodu - 100 Kgs
2.  Hindu Middle School - A.Thiumalapuram - 200 Kgs
INSPIRING INCIDENTS
C.Guilda – Sakthi Dharmapuram – Kanyakumari district
This incident happened during the arrangement of Thiruvattar Deepa Pooja. Myself and Leela Akka went for getting a tin of oil worth Rs.1100/- . We approached a housewife and she gave us Rs.550/-. We got Rs.101/- from another house. When we were thinking for the balance amount, a person called us. He asked us not to go anywhere for money and gave us remaining money Rs.550/-. We thought of God’s Grace and thanked him. This inspired me a lot.
C.Leela – Peyankuzhi – Kanyakumari district
This inspiring incident happened while I am searching for well wishers for monetary helpto print notice for the Deepa Pooja to be conducted at Thiruvattar Aadikesava Perumal Temple on 23.08.2015 . I happened to meet a student who studied in our Balwadi 22 years back. His name was Vaikunthamani and he is handicapped. On hearing my need he told me that he could bear the total expense as he was running a mobile shop. Then only I realized that our Kendra has developed so many social workers and service minded personalities. I blessed him for a blissful future and prayed Annai Aadhi Parasakthi to shower her blessings.
S.Anbarasi – Vallankumaranvilai – Kanyakumari district
This inspiration happened while attending the training camp at Kanyakumari. Ayyappan Annachi had arranged for watching an inspiring documentary film on Shree Eknathji Ranade. The film show occupied my mind and heart totally with the devoted and dedicated services rendered by the founder without exposing him to the public. When I visited the Vivekananda Rock Memorial amidst the sea, I was really stunned. I wonder how Eknathji acquired such a strength and devotion towards establishing Kendra and Rock Memorial. His life pattern inspired me to lead a life like Eknathji.
C.Selvarani – Paramakudi – Ramnad district

To conduct the ‘Deepa Pooja’ at Rameshwaram temple, we went to the Temple Police Station to get the permission. The Sub Inspector of Police enquired us all the details and gave us the phone to speak to the Inspector. Though the Inspector is a Christian he encouraged us to change the number from 2007 to 3006 and assured us that he would supply the match boxes needed. We thanked him and asked him to supply camphor instead of match boxes. He accepted at once. On hearing this, the lady constable was ready to share some of the expenses. This unexpected help encouraged us to render our services more enthusiastically.
at 2:15 PM No comments:

Highlights of activity updates from various corner of the Country

This month’s newsletter brings you another beautiful signage which we have erected near Agni Teertham as part of ‘Green Rameshwaram’ initiative. The signage quotes Swami Vivekananda’s visit to Rameshwaram - “The very dust of this land has become holy to me; the very air is now to me holy; it is now the holy land, the place of pilgrimage, the teertha”.
In our happenings section, we have various training programmes mainly on Fish Amino technology, which were sponsored by NRDC, New Delhi, Holistic health, Renewable energy sources, etc. In addition, as a part of Social Engineering, we have series of networking activities. In the ‘Green Rameshwaram’ project, we have highlighted Prize distribution programme on Rangoli competition, Awareness programmes and Renovation of Papavinashaka Teertham. This month onwards we are going to have a separate newsletter for “Green Rameshwaram” project which you will receive in the coming days.
In the wisdom section, we have Dr.Vandana Shiva co-relating Limits of Nature and Development, Claude Alvares on Arrogance of Science and its effects on indigenous Indians and Otto Ullrich boldly informs us about the Harmful effects of Western technologies.
You can download and read our newsletter here
at 2:12 PM No comments: 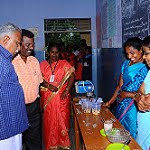 In our school we celebrated Mothers’ Day in a grand manner on 27.02.2016. The function was commenced with devotional prayer song by our teacher. Next our principal welcomed the gathering of the function. Dr. Manickam, Leader of Sri RamaKrishna Paramahamsa Mantram, Panagudi Advisor of Tirunelveli Docters Association as a chief guest and made a great privilege for us. Shri. S.K.Subramanian graced the occasion with his support in all the arrangements.

Many competitions were conducted for the mothers and the winners were honoured by giving prizes. Many mothers took more efforts and interestingly prepared more delicious and varieties of dishes from natural things without fire and wire. At last the celebration came to end with Kendra Prayer.