V​ivekananda ​K​endra​ Odisha Seva Prakalpa​ conducted non-residential Personality Development Workshop at 4 places in Odisha for the children to nurture not only their personality but also to inculcate the Indian values.​ First workshop was organised at Rutisela from 16th to 18th May 2017 where 72 children participated, while rest of the 3 workshops were organised at Dvabandh from 21st May to 23rd May in which 124 children participated.
Children were enrich with five fold development of personality as envisaged by Swami Vivekananda. The workshp include different games to improve concerntration, memory power and help to develop Team Spirit. Children came out with practical suggestions to make a positive changes in society.
at 12:01 PM No comments: 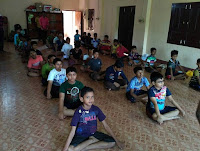 Vivekananda Kendra kanyakumari Balasore branch has organised a non-residential Personality Development Workshop from 5 to 14th May 2017, in which more than 50 students participated and learn Yogabhyas, Story, Patriotic & Action Song.
at 11:32 AM No comments:

Vivekanand Kendra Kanyakumari, Branch Beawar, has organised the Sanskar Varga Prashikshan Shivir from 17 to 20 May 2017. The shibir is fully residential for the student from age group 9 to 15, in which total 105 children participated and learn Mantra, SuryaNamaskars, Bhajan, Story telling, Patriotic Song and Yogabhyas.
at 4:00 PM No comments:

All India Yoga  Shiksha  Shivir was held in Vivekananda Puram, Kanyakumari from 05th   to 19th May 2017.

The reporting day was 4th May and most of the participants had arrived and reported during the day. Thirty nine  participants from Five different states viz, Maharastra,Tamil Nadu, Kerala, Karnataka, and West Bengal are reported.

On the same day the participants  attended the Bhajan Sandhya and Introductory session, wherein the participants were given orientation for the camp. The medium of the camp was in Hindi and English. The 39 participants of Yoga Shiksha Shivir and 25 participants of Yoga Certificate Shivir were organized into Six  different groups, The Names of Holy Rishies related to Darshan Shastra given to groups.   Three English Group – Kanad, Jaimini and Ved Vyas & Three groups for Hindi – Kapil, Patanjali and Gautam

On 10th May there was session on Adi Shanka and Rama Krishna Paramhansa and Maa Sharada by Dr. K. Subramaniyam which was combined for both groups. In This Camp  two new subjects added one is Gauravshali Bharat and Tyaga aur Seva which was guided by Ma. Nivediata Didi. There was a Q & A session based on questions on Bhartiya Samskruti – All questions answered by VRMVK 's VicePresident, Ma. Nivediata Didi, who was conferred with PadmaShree Award recently.

During Manthan session Participants discussed on the subject based on various  lecture sessions. During Shram-Samskar, participants took care of the cleanliness, arrangement and management of the premises, accommodation, class rooms and dining hall displaying team-spirit and selfless service.

Darshnam. That day Bhajan sandhya was arranged in front of Shri Hanuman Statue at Aramayana Darshnam.

The Shivir went on well in a congenial, spiritual atmosphere with moderate discipline and affection.  On 11th  May  Prearna se Punuruthhan  was conducted by Ma. Hanuji at  Vivekanand Mandapam. All Participants enjoyed it. Many of the participants have expressed their willingness to devote their time and energy for the Service of the society through Vivekananda Kendra. Some are enrolled as Patrons thus joining the large family of Vivekananda Kendra.
at 3:51 PM No comments: