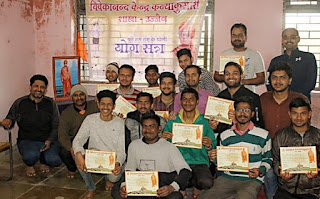 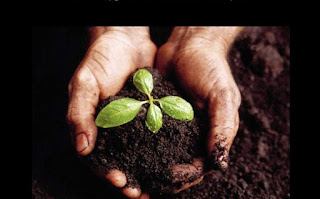 Sir Albert Howard was an English botanist, an organic farming pioneer, and a principal figure in the early organic movement. Howard worked in India as agricultural adviser and was in charge of a government research farm at Indore. Howard observed and came to support traditional Indian farming practices over conventional agricultural science. Though he journeyed to India to teach Western agricultural techniques he found that the Indians could in fact teach him more. One important aspect he took notice of was the connection between healthy soil and the villages' healthy populations, livestock and crop. His 1940 book, An Agricultural Testament, is a classic organic farming text. In this issue, we have given some of his quotable quotes.

Vivekananda Kendra received the prestigious Gandhi Peace Prize. In this issue, we are covering the details along with the citation.

Composting technologies
Terrace garden
Vermi compost techniques
Fish amino technology
Construction of Bio-methanation plants
Paper presentation and usual Networking.
In the wisdom section, we are covering Vertical drift by way of the breakdown of villages, migration to the towns and the subsequent misery. Shri.Edward Goldsmith environmentalist, Writer and a Philosopher suggests Small scale alternative for Spiritual wellbeing and finally Shri.Gunter Pauli author of ‘Blue Economy’ advocates Cyclical patterns in business as in ecology.

For reading the newsletter, please click here.
at 12:12 PM No comments: 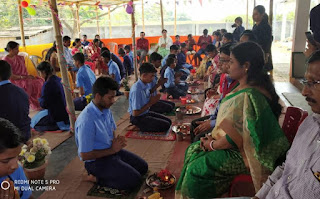 Matri Puja of mothers of class X was performed at VKV Borojalenga on 15 February. Students of class X appearing AISSE, 2019 performed the ritual under guidance of Sri Santosh Dubey, Sanskrit teacher of VKV (NEEPCO) Umrangso. The chanting of mantras and value based stories narrated, added to the serenity and piousness of the occasion. As guided each student took a pledge (sankalp) by lighting a lamp round India map to dedicate their service to the wellbeing of the nation in their capacity as they grow up. Both the father and mother were present on the occasion. The students offered their veneration to the parents and were blessed in turn. Prof Aitri Deshmukh AU, Prof. Manabendra Dutta Choudhury, AU, Prof. DK Pandiya, AU, , Sri Nirmalendu Deb, Sri Bijan Saha blessed the students being part of the occasion.
at 11:01 AM No comments: 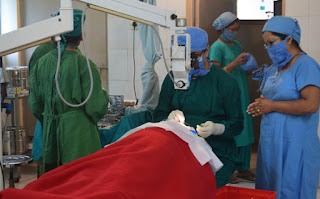 Vivekananda Kendra Kanyakumari in association with District Blindness Control Society, Tinsukia organized one Free Cataract Surgery Camp at Chapakhowa Hospital, Sadiya on 27th and 28th February 2019. A total 31 poor and elderly patients were successfully operated during the camp. Dr.G.S.Gogoi, Dr. Alaka Devi, Dr.Vikash Sharma and OT team of Tinsukia Civil Hospital rendered their valuable services during the camp.
Three screening camps were organized at various places of Sadiya area and our medical team screened 41 patients for surgeries. In these camps, we measured the blood pressure and blood sugar of all screened patients.
This is to be mentioned that in 2018-2019, we organized 5 cataract surgery camps in Sadiya area and successfully operated 183 patients.
at 10:59 AM No comments: 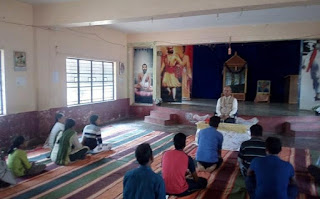 Residential Yoga Retreat was conducted at VKV, Kallubalu. About 15 participants took part in the retreat, including teachers of the school. The retreat started on 25th Jan by 5PM with bhajans and introduction followed by games which was enjoyed

On 26th Jan, the participants were taken down memory lane as they involved in the Republic Day celebrations with the school children. Lt Col Selvi hoisted the flag. She received march past salute from the school band after singing of National

Anthem. Post the celebrations, participants got to interact with Lt Col Selvi who emphasized the need for "Patriotism in Daily Life" and how we can express it by following right practices everyday. The afternoon session on "What is Yoga" was enlightening. Lalita didi explained the concepts of Yoga through many stories. The day also included agnihotra, prathasmaran, asana & pranayama practice, bhajans, kridayoga, prerana se punaruththan.

On 27th morning, participants were invited to be part of Samskara Varga at Krishna Doddi, a village close to Kallubalu. They enjoyed being with children reminiscing their own childhood days. The participants got to distribute prizes to the winners of the games and were happy to give their blessings to children. The children enjoyed the breakfast after the games. The outing to Krishna Doddi was followed by session with Lalita didi on "Raja Yoga". The participants got clarity on many doubts they had about Raja Yoga.

The day also included agnihotra, prathasmaran, asana & pranayama practice. The planning for future retreats to be conducted was discussed.

The retreat was concluded by interaction with renowned ISRO scientist Sri T G Krishna Murthy. Himself being an ardent follower of Swami Vivekananda, he inspired all of us through his personal experience and instilling in us to adopt Shradda, Confidence and Compassion. His speech also motivated the participants to contribute to the society and nation.

The participants gave their feedback and encouraged us to have regular retreats which will benefit everyone, especially residents of Bengaluru.
at 10:56 AM No comments: 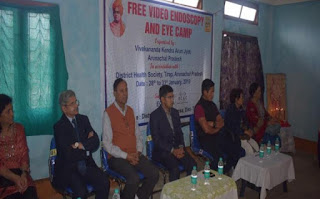 The camp was inaugurated by Sri Jitendra Meena, IPS, Superintendent of Police, Tirap district on 28th   January 2019. All the HOD’s were present in the meeting.

Patients from all circles of Tirap and Longding districts took the opportunity to get the specialized health services at their doorsteps. In four days 118 Endoscopy procedures were done for patients. Dr.Udayan Dixit examined 202 eye patients. It was a very successful camp. As being a very remote district of Arunachal Pradesh; medical facilities are very limited in Tirap district. Seeing the need of specialized eye care and treatment, Dr.Udayan Dixit is interested to visit Tirap again with more machines and man-power. 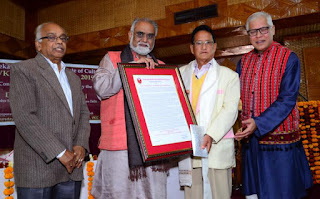 The Vivekananda Kendra Institute of Culture today conferred its VKIC Sanmaan for the year 2019 on Nabam Tata of Arunachal Pradesh. The honour is in recognition of his lifetime endeavour to protect and propagate the culture of the Nyishi Community, which in turn has inspired indigenous faith movements in other parts of the State.

Tata, from the days of his youth, has overcome great odds to carry out research and documentation on Nyishi culture. His years of efforts in different parts of Nyishi territories have resulted in the creation of a rich repository of folk culture, literature and oral history. Today, the Nyishi have a sense and pride and identity built on their rejuvenated cultural roots.

A proponent of indigenous faith and culture, Tata has acted in many plays and films, which includes playing the protagonist in the first feature film of Arunachal Pradesh which was directed by the Late Dr Bhupen Hazarika. Since then he has also composed new songs and verse which reflect the Nyishi traditional beliefs and practices.

Accepting the award, Tata expressed his gratitude to Vivekananda Kendra, particularly for spreading education through its schools and enabling the community to preserve their own cultural inheritance. “Today, people in our state know that if a child is studying in a Vivekananda Kendra Vidyalaya, the student will turn out as a fine human being. The VKIC too has come forward to document our ancient customs and traditions.” He said efforts must continue to rejuvenate the cultural roots of all indigenous communities.

Speaking as the Chief Guest in the programme, Dr Sachchidanand Joshi, Member Secretary of Indira Gandhi National Centre for the Arts (IGNCA), asserted that North East India is actually at the heart of Indian culture and also Akahnda Bharat that extends between Afghanistan and Indonesia. It is also here that a great vault of traditional textiles, handicrafts, and other artefacts exist side by side. It is a range so rich and varied that it is larger than that located in a region like Europe.

He exhorted the audience to take pride in their ancient heritage, and draw inspiration from it. The idea of India cannot be comprehended if we see the country as merely 70 years old. The actual reality is that its cultural traditions have flowed ceaselessly for more than millennia. Dr Joshi underlined the need to have an education system in which culture becomes an integral part.

In his welcome address, Dipok Kumar Barthakur, Chairman VKIC mentioned that VKIC’fs Foundation Day celebrates the attempt at man-making and nation building at the intellectual level. This day is also to remember with solemnity Mananeeya Eknath Ramkrishna Ranade, who had conceived the idea of VKIC as a means carry out research and documentation that would lead to culture nurturing unity.

“The Vivekananda Kendra Institute of Culture, as a project of Vivekananda Kendra Kanyakumari, is at the forefront of protecting and promoting the indigenous culture of North East India. We have many challenges, but VKIC is dedicated to overcome those,” he added.
at 10:52 AM No comments: 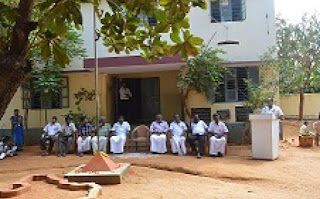 Republic Day Celebration at VKV Vallioor
at 10:50 AM No comments: 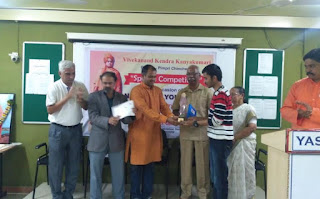 All the students participated enthusiastically and made full use of the opportunity provided to them. it was really nice to see the different views of the youth and their ideas to develop our country.

Our Guest of Honor: Shri Omkar Najharkar, spoke about variuos challenges before todays youth. He urgerd them to aim for good jobs, good salaries but at the same time they should also work for the betterment of the society.

Dr. Milind Marathe, Director - Yashaswi Institute IIMS also emphasized that the youth should be able to express their views properly. Many time they know everything technically but fail to put it forward properly, so they miss out on many good career opportunities.

Winners of this competition:

On behalf of Vivekananda Kendra we would like to thank Mr. Pawan Sharma, Mr. Abhijit Bhandarkar for Shri Gholve for supporting us and trusting in our maiden venture organized for the first time. 50 students from various colleges had participated in this event. Mrs. Manik Kulkarni and Mrs. Surekha Kumbhar were the judges for this competition.
at 10:45 AM No comments: 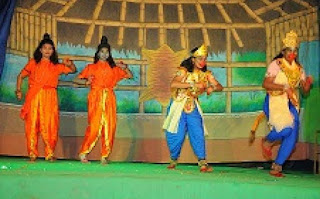 “ We build on Children’s strengths and celebrate their achievements helping children recognize the accomplishments and experience the joy of learning”. Annual day forms an integral part of our school activities.  It is an occasion of celebration, felicitation, feast and festivity when students present not only their wonderful performance but also receive honours for their curricular and co- curricular achievements. The annual day function of our school was organized on 12th January 2019. The combinations of three celebrations (Vivekananda Jayanthi, school Annual day, National Youth Day) were celebrated together. The function began around at 4 p.m. Sri. Mayakrishnan BBA.,B.L., Subordinate Judge, Vallioor was the chief guest. Sri. Venkatesan, Senior Advocate, Panagudi was the special guest. Man. Ayyappanji, secretary of R.D.P, Vivekananda Kendra , Kanyakumari graced the function with his presence and blessings. Our correspondent  Sri. S.K. Subramanian presided over the function. The honourable chief guest appreciated the school for its all round success and wished a better future for the students. Speeches on the greatness of Mother Bharat, views of swami Vivekananda, aim of Vivekananda schools and duties of us to be the good citizens of our nation etc.. were presented by the dignitaries. Our Principal Mrs. Andal read out the school Annual report. Prize distribution function was a moment of pride and honour for all the winners and achievers of the school.  Rs. 10,000/- was awarded to the top scorer in XII std (K.Sudalaikalathi) by Dr. Muthukrishnan, Eswari Nurshing home, Vallioor in the memory of Dr. Lakshmanan.  Varieties of programme like Drama, Dances, Patriotic song, Dance on Kendra activities, Hanuman dance were performed by the students exposed their efficiency. Dance on Functions (Kendra activities) performance  by students was made more colourful in the cultural programme and got a big round of applause. Finally the programme ended with Kendra Prayer. Our Correspondent Sri. S. K. Subramanian organised the function in a grand manner.
at 10:43 AM No comments: 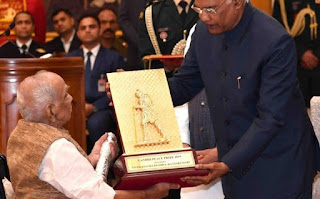