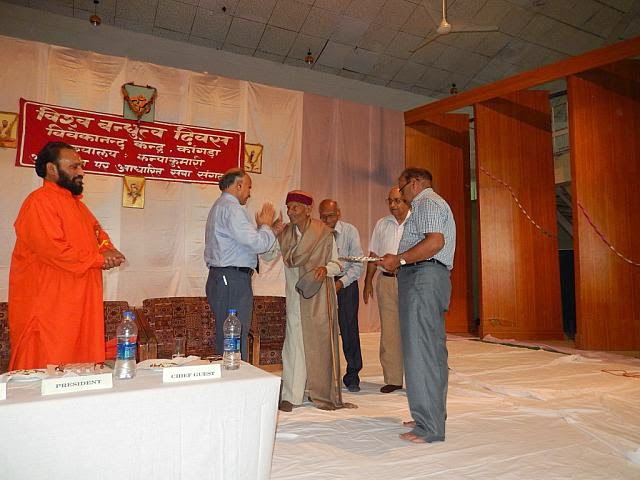 Kangra : September 11-  The self transformation among all sections of the society, particularly among the youth, was need of the hour in order to see a  transformed society grows in days to come and the cherished dream Swami Vivekananda is fulfilled to have an ideal India.

Prof. Yoginder S Verma Vice Chancellor Central University Himachal Pradesh  said this while addressing a well attended gathering of youths  and intellectuals in the auditorium of the local polytechnic on the occasion of 'Universal Brotherhood day'  today  organized by local branch Vivekananda Kendra Kanya Kumari  to commemorate the historical speech delivered by Swami Vivekananda in the world religious conference on September 11, 1893.Prof. Verma was speaking as Chief guest on this occasion.

He  said that the teachings of Swami Vivekananda were more relevant today than when he addressed the World Religious conference on this day in 1893 at Chicago when Swami ji gave call for ' Universal Brotherhood'.

He said that Swami Ji had been clear  that one should  think positively about every things that would help society to grow positively which was need of the hour. He stressed on the youth to infuse in them the strength of the teaching of   ‘Nishkam Karmyoga’ of Bagwat Geeta  and should come forward to help the needy and down trodden which  would help them in their
transformation.

Swami Gangeshanand Acharya of Chinmaynand Mission  who Presided over the function  said that youth should make  Swami Vivekananda their icon to lead an ideal life. He stressed on the youth to follow  Swami Vivekananda’s teachings  which would keep them close to their cultural roots and religion too which was need of the hour.

Dr. Parveen Kumar Sharma, Principal Dronacharya College of Education Rait who was guest of honour narrated different incidents of swami ji’s  life to bring youth close to his life and teachings.Parveen Kumar Sharma has done his Ph.D on the life and teachings of Swami Vivekananda.
Ashok Raina  of Vivekananda Kendra  Kangra   in his welcome  address stressed on adopting the path of righteousness shown by Swami Vivekananda to have better tomorrow for India. He stressed on the self transformation among the youths to see the dream of Swami Vivekananda  of a prosperous India  in right perspective comes true.

Nearly fifty Bhramcharies of Chinmamyanand  Mission also attended three and half hour program which started at 11.00 am and concluded at 2.30 pm and after the program all were served a cup of tea. Lunch was arranged for the Mission Brahmcharies besides their transportation Winners were given prizes by Prof. YS Verma. Dr. Ghautam Vetith, Prof. Neelam Mahajan  and Dr. YK Dogra Judges of the declamation contest too were honoured by the Chief Guest.

Hoshiyar Singh  102 year old Indian National Army Freedom fighter and associate of Neta Ji Subhash Chander Bose resident of Bara Village of this district, who foot the distance of 6000 kms from Rangoon to the Layshi before he was arrested and jailed.

He was sentenced to death but later it was converted to life imprisonment. A standing ovation was given the audiance in  jam packed hall amid clapping to the freedom fighter.

Hoshiyar Singh on Behalf of Kendra honoured the three guests.A Bajan was sung by Sunil Ji on this occasion left the audience spellbound. The program was started with lighting of the Chief Guest and other guests followed by Vedic Chanting by Brahmcharies of Chinmayanand Mision.
A sales counter was set up where books and novelties  were sold. E.O.M