‘Dharmar Theertham’ comes to the fore after 60 years 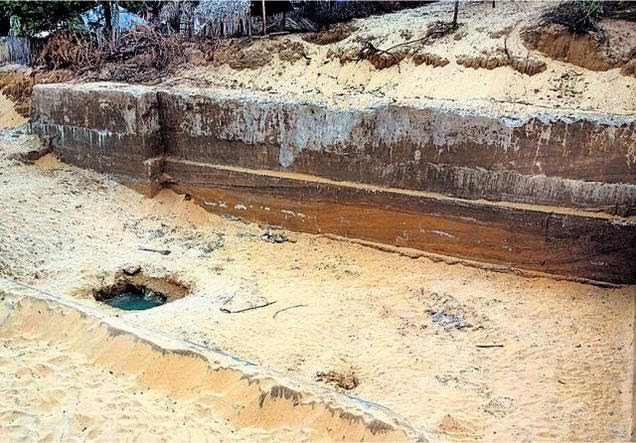 The Vivekananda Kendra’s relentless efforts over a month helped to dismantle a huge sand dune built by strong winds, bringing out ‘Dharmar Theertham’, one of the venerated water bodies on this historic island, after more than 60 years.
The Kendra, which renovates the ‘Theerthams’ as part of its ‘Green Rameswaram’ project launched in January, has discovered the water body named after one of the five Pandavas, to the delight of scores of pilgrims, who thronged the island to offer worship at the Sri Ramanathaswamy Temple after taking bath in the ‘Theerthams’.
After it started the renovation under its Natural Resources Development Project to mark the 150th birth anniversary of Swami Vivekananda, the Kendra stumbled upon the ‘Theerthams’ of the Pandavas and their wife Draupadi, but could not locate them. Making strenuous efforts with the help of a map given by the temple authorities and information from the aged people, Kendra workers located the ‘Theerthams’ of Bhima, Arjuna, Nakula, Sahadeva and Draupadi, but ‘Dharmar Theertham’ remained invisible.
They moved to the site of a huge sand dune, believing the words of the elders, and started excavation. Soon, they hit the retaining walls. “We worked for a one full month and removed 6,000 tractor loads of sand to unveil the water body with the structure intact,” Project Coordinator V. Ramakrishnan old The Hindu.
The ‘Dharmar Theertham,’ located near ‘Ramar Padham’ (the footprint of Lord Rama) which is the highest altitude of the island, has already attracted pilgrims. Sweet water kept replenishing in a small pit in the middle of the 80x35-foot structure.
“I vividly remember the ‘Theertham’ when my father used to carry me on his shoulders, and later when we used walk from Vadakadu to the school at Rameswaram,” recalled P. Mangalam, 76, a native of Vadakadu. It started disappearing even before the infamous 1964 cyclonic storm that devastated Dhanushikodi, he says.
“After cleaning up the structure, we propose to build a retaining wall and throw the ‘Theertham’ open to pilgrims,” Mr. Ramakrishnan said.
Ref : The hindu
at 4:13 PM