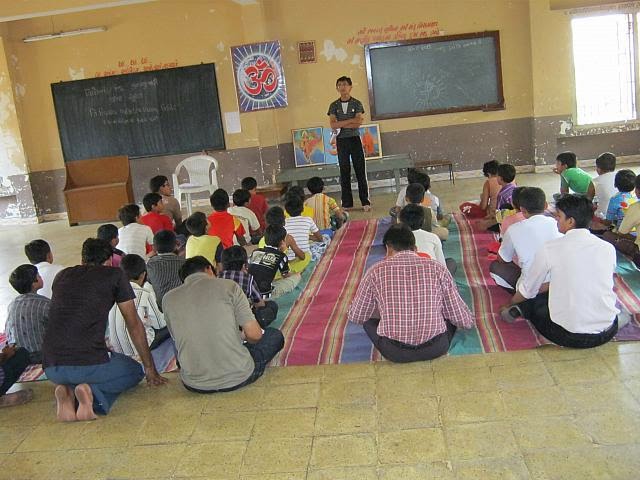 Vivekananda Kendra Kanyakumari, Branch  Surat organized a 3 days Residential Personality Development Shivir for the students of  Pinvad at Dharampur on the 29th August to 31st August 2014 . The main motto of the camp is to give future a positive direction and to inculcate patriotism, cultural value, self discipline and the attitude of Social Service, with the twine ideal of Vivekananda Kendra “Man Making – nation Building” through the various sessions on  Niyudha, lecture, Geet & Slokh chanting, Story Session, Best from waste and scientific design, concentration, memory development games & craft session. Total 88 participants took part in the camp.

In all 3 lecture sessions were taken on various topics such as MATRUBHAUMI, BHARAT VEERO KI BHUMI & BHARAT SHARAN KI BHUMI.

The theme for three days were DHAN, SHAHAS & SAHAYATA , which are our apparent qualities that is to be realized. The camp was introduced by Shri. Sanjaybhai Pandya (Vivekananda Kendra Kanyakumari, Surat Branch Sampark Pramukh and MEJSP Bardoli and Dharampur Pramukh . He also exhorted the participants to carry forward the positive attitudes, good personalities and set an example in the society.

Kum. Vaishaliben Rana, Vivekananda Kendra Navsari Karyakarta and MEJSP Navsari Pramukh took session on Matrubhumi.  In her session he discussed about our holiness of this land Bharat, characters of great persons of our country, personalities are responsible for to make great persons and these good qualities are  confidence, Trust in own, Honesty, Enthusiasms, Discipline and Aim. He told on thoughts of Swami Vivekananda “You have to grow from inside no one can teach you, none can make you spiritual. There is no other Teacher but your own soul.”

Shri.Sanjaybhai Pandya took the session on the Bharat Veero ki Bhumi  & Bharat Sharan ki Bhumi.  In his session discussed with the children about the such personalities those who have given their whole for the sake of nation and also discussed that which country will be Stronger? Whether  the country which is giving SHARAN or those taking Sharan or those who doesn’t give Sharan.

Physical part “Strength is life weakness is death as Swami Vivekananda says”. So with this motto session were also conducted through Games, Parade & Niyuddha etc.
at 5:51 PM