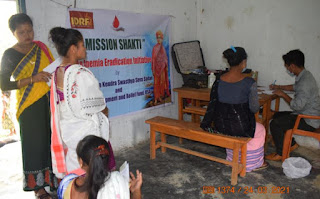 Vivekananda Kendra Swasthya Seva Sadan, Laipuli, Tinsukia, Assam and Vivekananda Kendra Arun Jyoti, Arunachal Pradesh in association with India Development and Relief Fund (IDRF), USA started an anaemia detection and eradication program, MISSION SHAKTI for women in 16 villages in Tinsukia district of Assam and Changlang , Tirap and Namsai districts of Arunachal Pradesh. The program was launched on 1st January 2021. Our team conducted 16 camps and examined 1381 women. 716 women (12 yrs to 45 yrs) were screened for Anaemia and 206 women were found as acutely anaemic by March 2021. Almost 30% women were found as acute anaemic. Counselling of anaemic women were done and they were informed about their iron deficiency and were advised to consume iron rich locally available food like dark green leafy vegetables , banana flower etc.  All anaemic women were provided with Iron Folic Acid supplements. Initially, we provided them supplements for three months. After three months, second round of Haemoglobin estimation will be done to see the impact. We have already done the second round of screening in one village and it was found that the haemoglobin level has been substantially increased in all the four anaemic women of that village.
It is a research work as we are working in various ethnic groups of Tinsukia district and Eastern Arunachal Pradesh. The communities included are tea tribes, Tangsa, Ahom, Missing, Sonowal Kachari, Motok and Hindi speaking migrants. As per the present data available with us, it is found that in Missing community, anaemia is more prevalent as we found nearly 60% women are anaemic. So, we are planning to include a few more Missing villages in the second phase. Along with conducting medical camps, we are studying the food habits of various ethnic groups, their life styles, their way of growing nutritious vegetables etc. to find a holistic solution to eradicate anaemia.