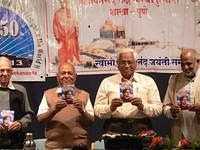 VivekanandaKendra Marathi Prakashan Vibhag Pune has released 7 books on Swami Vivekananda's life & messages in the Eve of his 150th Birth Anniversary. The book release function has been organized at "Nivara"Hall Pune on 20th Jan. 2012. Prof. Shri. S. N. Navalgundkar (Former Vice Chancellor' Pune University). was present as Chief Guest, and felicitated all the writers. 100 well wishers were present in the program. The details of published books along with the writers are as follows.