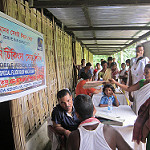 We had the camp at Pahumara Village on the first day where around 400 patients attended and at Bhakat Chapori on the second day where the attendance was around 200 patients and would have been more had we not ended the camp at 12:20 pm as we had to pack up an return (had to leave the vehicles on one bank of a stream and transfer the team including the medicines to the other bank and then again move further on to the camp site which) to catch the ferry at 3:00 pm. Free medicines were provided to the patients after consultation.

The programme was co-ordinated by Shri Basudev Upadhyaya, Principal VKV and his team of teachers and parents. Two doctors from Majuli government hospital also joined the health camp on the first day for 2 hours on request of Principal VKV. I also accompanied the medical team to Majuli.
at 2:49 PM