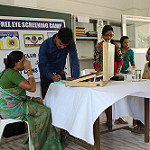 A total of 73 patients got their eyes checked. Out of those, 21 were from VKV Golaghat including 8 students. The students' parents were later on conveyed the suggestions/treatments prescribed by the doctor.

Out of the general public, three (03) patients required operation and were taken by the Lions Eye Hospital group yesterday itself for free operation.
at 2:41 PM