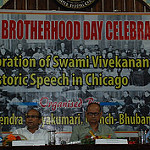 CHSE Chairman Basudev Chattoi graced the occasion as Chief Guest and impressed upon the relevance and usefulness of Swamiji’s speech and values in the present day context.  Quoting from the famous Chicago speech of Swami Vivekananda he highlighted the need for universal brotherhood to maintain peace and all round development of human race irrespective of their religion. He said that the man on this earth has continued too long to be fanatic about insisting that his religion alone was true and other religions being false had no right to exist.

Winners of various school, college and university level competitions organised by Vivekananda Kendra Kanyakumari in Bhubaneswar in the first week of September were felicitated with prizes and citations on this occasion. A Group yoga competition was held on 3rd September by the Kendra wherein 13 schools of the city participated. The 1st prize winners performed a group yoga sequence during the function.

The winners of the interschool completion on Odia and English recitation of the epic speech of Swami Vivekananda held on 4th September were also felicitated on this occasion. Students from 21 different schools in the city participated in this completion.

Similarly, the winners of ‘Uttishthita Jagrata Swadhyaya’ examination on the book containing messages of Swami Vivekananda on SELF development, held at various colleges and departments of Utkal University were felicitated on this occasion. A total of 368 students of colleges and university participated in ‘Swadhyaya’ competitions.

A documentary film on Mananeeya Eknathji, the founder of Vivekananda Kendra KanyaKumari, was also screened on this occasion.

190 wellwishers and children attended the programme.
at 2:50 PM