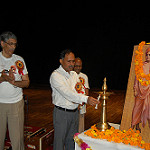 KANGRA : SEPTEMBER 11- The self transformation among all sections of the society, particularly among the youth, was need of the hour in order to see a transformed society

grows in days to come and the cherished dream Swami Vivekananda is fulfilled to have an ideal India.

GD Bhargava Inspector General of Police  Northern Range, who was Chief guest on the occasion of  Universal brotherhood day organized by local branch

Tanda to commemorate the historical speech delivered by Swami Vivekananda in the world religious conference on September 11, 1893. He said that the

teachings of Swami Vivekananda were more relevant today than when he addressed the World Religious conference on this day in 1893 at Chicago when Swamiji gave call for ' Universal Brotherhood'.

which would keep them close to their cultural roots and religion too which was need of the hour. Dr. Anil Chauhan  Principal DRPGMC Tanda, Guest of

honour also stressed on the youth be close to Swami Ji’s teachings.

Ashok Raina of Vivekananda Kendra stressed on adopting the path of righteousness shown by Swami Vivekananda to have better tomorrow for India. He

stressed on the self transformation among the youths to see the dream of Swami Vivekananda of a prosperous India  in right perspective comes true.

Earlier a marathon organized by Vivekananda Kendra  which was attended by large number of people from all sections of the society. Boys and girls in

hundreds from six Post Graduate colleges of the district participated in the marathon.

The marathon was flagged off by  GD Bhargava, IAS, IGP from Tehsil Chowk of this town which concluded at DRPGMC Tanda. The audience appreciated Kendra

for organizing such an impressive program.

In girls section  Rekha from Old Kangra, Swaiti Kumari of Lalaid and Shikhen  Bharti of Govt. Polytechnic Kangra got first second and third

participant too was felicitated on the occasion marathon.

The winners were given besides cash prize of few thousand rupees, a set of complete works of Swami Ji and a certificate.

Hoshiyar Singh Thapa 93 year old Freedom fighter and associate of Neta Ji Subhash Chander Bose, was honoured on the occasion along with his wife Rampa

A book sales centre was set up outside the auditorium of DRPGM College Tanda Hindi and English dailies covered the event. E.O.M.
at 2:24 PM