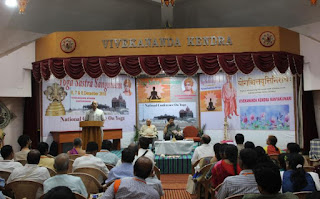 The Three Day Yoga Shasthra Sangamam (Convention) was organized by Vivekananda Kendra, Kanyakumari at Vivekanandapuram, Kanyakumari. It was inaugurated by Kum Nivedita R. Bhide, Vice Preseident of Vivekananda Kendra as its Chief Gusest by delivering the Inaugural Address she emphasized on the aspects that of this type of convention has the significance in todays' human life. She said that to understand the real and original value of Yoga such type of convention is need of the hour. Dr. M.V. Bhole ( Formerly of Kaivalyadham , Lonavla) was the Special Guest and he was present all three days.

A Souvenir was released by Shri Dr. L.MAHADEVEN on the occasion in the presence of Shri  Bhanudasji and Dr M.V. Bhole . The first copies were received by Dr. R.K. Sharma and Dr. Padmanabhan who also had delivered the Keynote addresses on other two days.

151 participants from 15 states made this truly a National Convention. The presence of overseas participants from 5 countries showed the great interest taken in yoga by people from abroad. 92 gents, 59 ladies participated in the program. 36 paper presentations were witnessed in 8 sessions spread over 2 venues within the Kendra premises with 16 Moderators monitoring the sessions.

Many Universities and Institutions in Yoga, experts in Yoga, Students, Yoga Teachers, professors, other academicians, Yoga practitioners, Researchers on Yoga and  several yoga enthusiasts came under one umbrella to take to the world the greatness of Yoga and the Greatness of various Yogic Texts and Scriptures.
at 11:54 AM