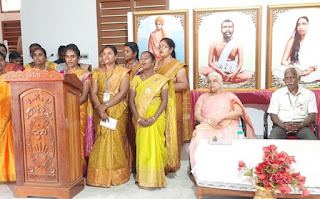 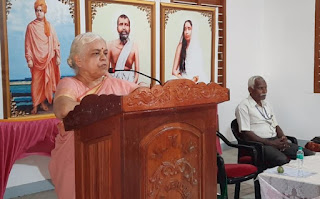 Swami Vivekananda, born on 12th January 1863 was an Indian Hindu monk and philosopher.  His was the life devoted to national regeneration and he motivated many young minds to work towards Nation building.  As a mark of tribute to his legendary hero, his birth anniversary is celebrated as National Youth Day across the Country.

“All power is within you;

You can do anything and everything”

On the very fine evening of 12th January, we inaugurated the program the lighting of the lamp by Mann. Rekha Didi, Joint General Secretary of Vivekananda Rock Memorial and Vivekananda Kendra followed by an invocation by our students.  Mascara of XI Std. offered a red carpet welcome to the participants.  G.Jany Nishmitha of XI std.  sang a melodious song praising the glory of Swami Vivekananda.  T.Vinisha of XII std. presented a very beautiful picture on the importance of the day.  The teachers of V.K.V. exhibited their patriotic fervor through their motivational song.  Man. Rekha Didi, the honourable guest of the day gave an astounding oration about Swami Vivekananda’s unique character, his travel to west, the wave of Sanadhana Dharma that vibrated across the country through his philosophical speech and motivated the youth to work for the nation.  She insisted the participants to read Swami Vivekananda’s lectures and not to touch anything that makes one physically, spiritually and mentally weak.  She advised us to have the ideals of Swami Vivekananda in our minds, spread his message throughout and strive hard to make India the “Jagat Guru”.

Vote of thanks was proposed by Keerthiga of XI std.  The programme was compered by Naveena of XII std.  Finally, the programme came to a fine end by Kendra Prarthana.