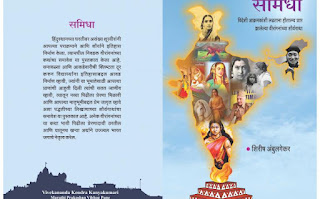 The book is authored by Shirish Ambulgekar and published by Marathi Prakashan Vibhag, Vivekananda Kendra Kanyakumari. “Samidha” is based on the inspiring biographies of 12 Indian women warriors who sacrificed their lives during the Indian Freedom struggle.

Ma Nivedita Bhide mentioned that the book with 12 inspiring biographies of women warriors would inspire the future generations to imbibe the qualities of courage, bravery and the 7 “shakti” of women as mentioned in Bhagwad Gita. It will instill the concept of Jagadjanani (Creator of Universe) for the readers. We should not forget the concept of “Rashtra” as Nation building. We have to be instrumental in making the Nation prosperous and set an example to the world. We should not forget the task set to us by Swami Vivekananda, of nation building.

Though the book launch coincided with International Women’s day, in India every day is a day of celebration and respect for women, which is our culture. She wished that in the 75th year of Swaraj of India, and 50 years of Vivekanand Kendra, many more such inspiring real stories, which have been forgotten, will be published by the Marathi Prakashan Vibhag!

Smita Ghaisas revealed that apart from courage and bravery, many other qualities of the women in the books can be emulated. She hoped that the book would prove to be an inspiration for the coming generation and make them aware of the rich patriotic, cultural heritage of India. She appreciated the work done by the Vivekananda Kendra in creating awareness about the concept of “Rashtra”, Nation.

Shirish Amburlekar explained that “ Samidha” means ultimate offering of “tyag” (sacrifice). He expressed that the purpose of writing this book was to remember the forgotten history of courage and bravery. It represents our rich heritage and culture. It should provide inspiration to the masses to understand what we can achieve.

The Book Launch held at Tilak Smarak Hall, Pune, was well attended. It was also broadcast live on face book.