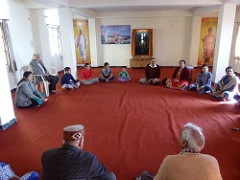 Sadhana Diwas was celebrated by Shimla Branch of Vivekananda Kendra, Kanyakumari with a Pariwar Milan & Sahbhoj on Sunday, 20th November 2016. The program was started with prayers followed shraddhanjali. With a warm welcome by Nagar Pramukh K.K.Sharma, a patriotic song followed by Parichay & varopis games like Message Passing & Srujan Dand was played in joyful environment with a message to scrutinize the bombardment of messages received through social media. After a T-break, Lifeworker Shri Hardik, gave insight of Ma. Eknathji's life and how a Karyakarta Sadhana is not only limited to himself but for entire family. The program was concluded with the Documentary Eknathji.