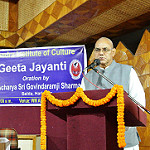 It is a fact which needs to be universally acknowledged that whatever great task we intend to undertake must contribute a lot so that mankind, in future, is able to fulfill the impulses of development prescribed by the universal cosmic order.

The members of VKIC along with other Karyakartas of VK celebrated Geeta Jayanti for the first time on 11th Dec,16 at VKIC  premises although it is celebrated every year at all the branches of VK.

The whole programme was performed with traditional gaiety and solemnity to spread the holy message of the Geeta--- as the harmony of the spiritual, ethical and religious aspects of life--- with outmost SHRADDHA.

Mananeeya Shri Shri Govindramji Sharma, from Hardwar, was the guest speaker to speak on the importance of Geeta in our daily life.

After Mangalacharan, Dr Parimal Bhattacharji, Director R.A.C. felicitated the guest, and then , in his unique style, extended a warm welcome to all and explained the purpose of the day. He specially pointed out that Geeta Jayanti is celebrated at all the branches of VK, but for the first time VKIC has organized this programme. Referring to the letter of Man. Nivedita Didi, received on the eve of Geeta Jayanti,  he appealed to all to understand the importance of the message of  the Geeta in our daily life. He also shared with all about various programmes being organized in different parts of the country and particularly in Kurukshetra.

This was followed by chanting of slokas from Geeta. Kum. Meenakshi Goswami led the chanting and all the devotees followed her.

Next came the most important part of the celebration--- oration by the guest speaker on Geeta. He also sang a song and after each stanza, he explained the same with special reference to the great work of philosophy. All the devotees, probably, had to delve deep in to the inner depths of the explanations. Shri Govindramji, during his oration, was referring frequently about Vivekananda Kendra’s service activities.

Next was vote of thanks by Shri Banwarlal Purahitji. In his rare style of using befitting words, Purohitji thanked everyone for their whole hearted co-operation to make the programme successful. He also explained the content of the letter of Man. Nivedita Didi and made an appeal to follow the same in our day to day life.

The programme concluded with Shantimantra.

At the end of the programme copies of the letter from Man. Nivedita Didi was distributed among all the devotees.

The anchoring part of the whole pragramme was done by Kum. Kathakoli Didi in her pleasant and unique style. Lastly PRASAD was distributed among all.

It is a fact that needs to be taken much care of that no action can flow in the right channels unless it is accompanied by a certain respect for the previous generation. Hence we must cultivate in the younger ones, by every means, a respect and reverence with which they look up to what former generations have already achieved and what they are also meant to achieve. In short, we the adults must set sterling examples for the younger ones. As the Geeta says – proper actions matter more than anything else.
at 1:55 PM