It was veritably a great opportunity for me to listen directly to the Hon’ble Prime Minister of our country at New Delhi in the National Level Launching of Mananeeya Eknathji Janma Shati Parva. The everlasting experience gives a great conviction for the need of ‘Man Making”. The fact that a poor lad who sold tea in the streets has become the most respected Prime Minister of our country and one of the popular faces in the world also surges an inspiring spark in all of us.

The members of the great organization which he associated during boyhood and early youth period played an important role to groom him by helping him to internalize the values in life which propelled him to work diligently for the Nation.

It was a great pleasure to know the contribution of Swargeeya Eknathji to groom him. It was a great cogitating session wherein he expressed conscious effort of Eknathji which has made a great change in him. He said “He had the habit of taking a nap after lunch everyday. Eknathji noticed this habit of him and one day he asked him to accompany him for a walk immediately after lunch. Eknathji did not mention anything of that but he took him for a walk in the preceding days also. After some days, he could get rid of that habit altogether”.  Shri Narendra Modi became eloquent to recount many more such incidents.

That experience sharing of Shri Narendra Modiji made me to remember the strength giving poem which I learnt in my schooling.

Truly, good words and actions would remain in the hearts of others. In the same way, Swargeeya Eknathji lives in the heart of millions of people as a perennial source of inspiration.

Sisters and brothers there are many things to share at this moment:-

The event was inaugurated by Shri. Nabam Rebia, Hon’ble Speaker, Government of Arunachal Pradesh at VKV Balijan in the presence of Shri Chuku Takar, ADC, Balijan, Shri Moki Loyi, EAC, Balijan, Shri Tana  Puna, ZPM, Balijan.
Speaking on the occasion, Shri Nabam Rebia said “He is fascinated to attend  any Programme of VKVs as he is impressed with Discipline, Patriotism and spirit” He urged the students to be useful citizens of the country. VKVs known for quality and it can be compared with any other good public schools of the country.

Final Result at a glance 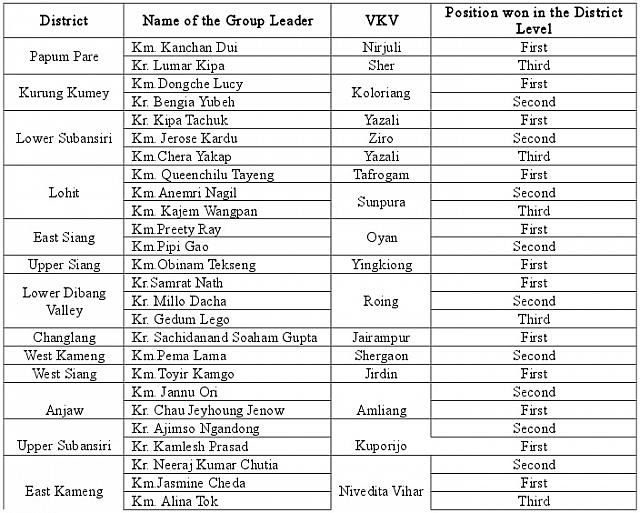 The top ten positions will represent Arunachal Pradesh in the national level to be held in Bangalore during December 27 to 31, 2014.
The second group member of the best two projects adjudged in this competition will get an opportunity to present their projects at the 102nd session of Indian Science Congress scheduled at Bombay University, Mumbai during January 3-7 next.

VKV shines at Governor’s Quiz: VKVs have occupied the top notch two positions in the Governor’s Quiz held on 15th November. The details are given below:

Vigyan Yatra Volunteer’s Workshop: A workshop for the Mobile Science Laboratory (MSL) was conducted on 9th November in VKV Nirjuli. A total number of 46 participants from different VKVs and student volunteers from NIT, NERIST and Rajiv Gandhi University attended the Workshop. The workshop enriched the participants on various experiments to be demonstrated in the MSL. The Resource Persons for this workshop were five senior citizens from Maharashtra. They all have retired from their active service life and are contributing to the nation with NGO “Vigyan Vahini” of Pune.

Sadhana Divas Celebration: All the VKVs of Arunachal Pradesh celebrated Sadhana Divas in the most spectacular manners. Various programs were conducted on that day. The details of the programs are given below:

The VKVAPT Administrative office, Dibrugarh also conducted a program to mark the occasion which included Group Discussions (in three groups) on the Write –up by Mananeeya Nivedita Didi, Speech, Patriotic Song and Puspanjali. The staffs also went to offer obeisance in the Pushpanjali Karyakram organized in Thana Charali in the afternoon.

Library Week Celebration: Library week was celebrated with manifold activities in consonance with the Sadhana Divas in many of the VKVs. The week was marked by various activities aiming to promote healthy reading habit and to expose the students to the world of books. Interactive sessions by writers from the localities, Book donation drive to enrich the school library, Display and Book Review Sessions, Owning a Book Drive (List was provided which included Kendra Publications and teaching Resource Books) were some of the highlights of the week.

Celebration of Local Festivals: Students from all VKVs celebrate the local festivals with much enthusiasm. VKV Kharsang celebrated the Rangfra festivals of the Tangsa Community with many activities. The students along with staff in many groups visited the Rangfra mandirs .During their presence in the mandirs, all the students and staff attended the prayer session, delivered speech and presented Rangfra Bhajans. The participation in the programme was appreciated by all the members of Rangfra society.

Talent Show and Exhibition by Primary Class Students: In order to give a vent to the multifarious potentiality of the students VKVs conduct Talent show. In the talent show conducted by VKV Kharsang following were the programs:

The large number of parents present in the program could experience a unique feeling by witnessing such program which reiterated the saying of Swami Vivekananda, ‘Education is the manifestation of the perfection already in man’

VKV Jairampur and VKV Seijosa also conducted Talent show with many activities which also have culled appreciation from the parents.

Vigyan Yatra: - Vigyan Yatra which was flagged off on 31 October 2014 has covered a large number of students from many schools from Papum Pare, Lower Subansiri and Kurung Kumey Districts.   A total number of 30 schools have been so far covered in the month of November benefitting 5334 students. The Vigyan Yatra is proceeding with the involvement of many volunteers to cover more schools in other districts of Arunachal Pradesh.

Participation in national level program in connection with Uddan: Udaan is a program of mentoring selected 1000 girl students to compete for admission at Premier Engineering Colleges. Tutorials, lectures and study material for preparation for IIT JEE will be provided online and on tablets given to the students and the comprehensive course will be provided in an online and offline format free of cost.5 Students from VKV Nirjuli, 1 from VKV Roing attended the national program of Udaan by CBSE. The students were given tablets to get the benefit of the online Resources. Km.Ridhi Srivastva of VKV- Nirjuli bagged the opportunity to speak and won the appreciation from all in the grand program organized in Delhi. To and fro flight charges and very good accommodation were also provided to them.

Prizes for the school level as well as Inter VKV level will be given to the winners.

Participation in the Adventure Youth Camp in Kaziranga: 41 Students from VKV- Nirjuli and Itanagar attended Adventure Youth camp organized by Chinmaya Yuva Kendra from 1st to 4th November at Kaziranga University.  Talks on 7 levels of transformation, Group Discussion, Debate, Adventure trips etc were the highlights of the activities.