The eternally debated ‘Dharma’ was the topic for the two lively discussions organized by Vivekananda Kendra at Hyderabad on 19th and 20th January 2015. Stimulating the minds of the young and the old alike, these discussions urged them to see beyond the commonly accepted definitions and understanding of Dharma. And what could be a better guide for them than its vision of Swami Vivekananda?

Based on the thoughts of Swami Vivekananda, Amrutha Bhashini Smt. Auna Devi questioned the prevalent understanding of Dharma and recalled the immortals words of Swami Vivekananda for awakening oneself to the true nature of Dharma and having faith on its validity. Quoting profusely the scriptures, she stated that what keeps the order in the creation is Dharma and what destroys it is not. The talk was followed by her interaction with the aroused audience.

In a second such interaction, Acharya Kasireddy Venkat Reddy - the renowned writer, poet and academician – enlightened the audience with his keen understanding of Dharma expressed lucidly to the mixed audience of young and old. Acharya Reddy recalled Swami Vivekananda’s forceful illustrations during his speeches in the West, which had compelled the audience there to rethink Dharma. The same he said is the need today in India and elsewhere, to rethink and return to the basics of Dharma – the oneness - with the help of Swami Vivekananda’s vision. The highlight of his talk was the frequent applause from the excited youth audience. The interaction that followed gave more clarity of the discussed subject.

These interactions are part of the “Vimarsh” programs which are being organised on the occasion of the Birth-centenary of founder of Vivekananda Kendra Kanyakumari Late Sri Eknathji Ranade. This nationwide program was set rolling by Prime Minister Narendra Modi on 9th Novembar at Delhi last year. At these Hyderabad programs, Sri Dipok Barthakur – National Chairman of Eknathji’s Birth Centenary Committee, Justice C.V. Ramulu – Vice Chairman and Sri M.G.K. Murthy IAS (retd) – Vice Chairman of Andhra-Telangana Committee, and several dignitaries and enthusiast from all walks of life were present. During these programs, two new Telegu books -  Swami Vivekananduni Jeevitanloni Sanniveshaalu and Yoga - Ekatva Drkpadam Aadhaaranga Jeevana Vidhaanam were released. 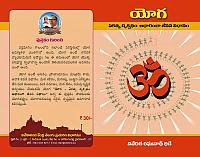 These programs were held at Ameerpet and Nagole. The next series of this “Vimarsh” interaction will be held in June 2015 and the topic will be “Seva”.
at 12:42 PM