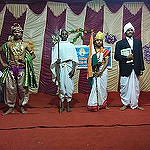 “The  soil  of  India  is  my  highest  heaven.  The  good  of  India  is  my  good”   Swami Vivekananda after his wandering all over India came to Kanyakumari and sat in meditation on 25 , 26 and 27 December 1892. To spread these message of Swami Vivekananda  amongst the public , to focus on cultural tradition, this Samartha Bharatha Parva is being conducted by all Vivekandanda Kendra Vidyalaya Schools.

This year we have selected the rural area  Thiruvenkadanathapuram (sirumazhanchi) near vallioor. Fifty  Students who were given enough practice and ten teachers went there. The programme  was  started at 6.30 p.m.   Village panchayat leaders Mr.Thangasamy Nadar and  Mr. Dhavasikani Nadar were the special guests. Nearly 325 people were the audience. Our Principal Mrs. R.Andal welcomed the gathering and the programme were commenced by prayer song and Bharathanatyam . Various  cultural programme like Debate ,  Patriotic dance, Folk dance,  National leader’s play @ conversation about Swami Vivekananda  were impressed by the audience.  Finally    Mr. Ooikattan, Rtd Postman  proposed the vote of thanks.  Mr.Jeyarai  who was the members of panchayat gave away the award on behalf of Sirumazhanchi people. The programme was concluded by Kendra Prayer. Our correspondent Mr.S.K.Subramanian arranged the function in a successful way.
at 2:07 PM