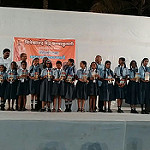 Vivekananda Kendra Borivali branch conduct Bhartiya Sanskriti Pariksha 2016 examinations for the students of various schools of Borivali and Dahisar on the life of Swami Vivekananda. The main intention of those examinations was that students should study the life of Swami Vivekananda and get inspirations from his life. We contacted around 15 schools and 8 colleges for this purpose out of which 8 schools and 7 colleges shown their interest in this activity. For each school /college 1st, 2nd and 3rd prizes were announced for two categories i.e. 5th to 9th students and Jr. College. It was further  decided to give consolation prizes for the students  who studied hard and performed very well but could not secure rank in first three.Papers were set based on the life of Swami Vivekananda. Different papers were set for different standards i.e. for standard 5to 7, 8th and 9th, standard 11th onwards different papers were set. Further those papers were set in 3 languages i.e. Marathi, Hindi and English as per requirements of school /college. We received tremendous response to those examinations from schools /colleges. Around 1700 students had shown their willingness to appear in exams. The books based on which those papers were set were circulated to each and every student of the school /college before Divali vacation and it was decided to conduct exams from 21stNov. to 23rd Nov. 2016 after Diwali as per convenience of school /college. Those books were mainly from Vivekananda Kendra and Ramkrishna Math publications.

The prize Distribution for students was done in 2 phases. Firstly in school / college level where only certificates where given in front of students and teachers, Secondly prizes announced before the exam where given on vivekananda jayanti on 14th jan, 2017 on Makar sankranti day. Venue is shiv seva  ground, Rajendra nagar, Borivali East, Mumbai and Time is 5.30 pm to 7.30 pm. The chief guest for the program is shri. Rambrij Yadav ji (Babuji ) , Social worker and chief speaker is Ma. Vishwasji Lapalkar, Sanghatak maharshtra Prant. Program strated with 3 om, prathana. Then 3 Pratyakshik performed   on the stage . Suryanamskar by 14 students from Borivali sanskar varg, patriotic street play by 8 students of  LN College Borivali –E , Skit on message of Vivekananda by 7 students from Gorai Borivali –W Sanskar  varg. Then samuh Patriotic song by 8 Girl students of Gokhale college, Borivali-W. After that Sri Rajendra Bardeji, Sanyojak of Borivali branch given the introduction of vivekananda Kendra and its activities in brief. Then shri. Paranjpe, vivekananda Kendra karyakarta read the report of the Bhartiya sanskrti pariksha 2016 conducted by Borivali branch.After that Ma. Vishwasji lapalkar addressed the public on the message of vivekanada  to the youth and their contribution in the nation building. Vishwasjis whole hearted lecture inspired the gathering in which school / college principal were there. Then prizes were distributed to the students by  Babuji & Vishwasji. Program is concluded with shanti mantra. On special occasion of  Makar sankranti day Tilgul and tea are served to all. Total persons attended the program are 300.The atmosphere during event is energetic. Program arrangement were done by the students who gone to kanyakumari Yuva netrutva vikasan shibir 25-27 Dec 2016 from Borivali branch (2 colleges – LN & Gokhale college and all the karyakartas of VK Borivali.
at 2:29 PM