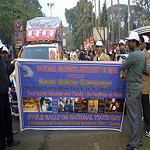 Guwahati 12th January 2017: Swami Vivekananda’s Birth Anniversary and  National youth Day had been Celebrated  in Guwahati Mahanagar by organizing  Cycle rally and 28th Road Safety Campaign . Good number of Youth came out of their homes early in the morning at 6:30 am and went around the heart of the town spreading the message of Swami Vivekananda and road safety awareness in Sobha Yatra .The Cycle rally along with Bike and Vehicles went from Bharat Seva Ashram ,Kalapahar and Dighalipukhri area and  culminated at a Field of Deepak Sangha Society ,Nabagraha Road ,Silpukhuri . With a large percentage of the road accidents, fatalities and injuries involving road users in the age group of the youth, the road safety awareness programme was aptly held on the National Youth Day( Swami Vivekananda's Janma Jayanti. A large number of youth were present on the occasion and took active part in all the proceedings.

A Cycle Rally was flagged off by Shri Raj Chakrabarty, Chief General Manager & Regional Officer National Highways Authority of India along with members of the Vivekananda Kendra at Dighalipukhuripar and From Kalapahar area near Bharat Seva Ashram ,the Flag off was done by Dr. Saraju Das ,renown Educationist and Social worker . The Cycle rally proceeded through the streets of Guwahati city with display of a Vehicle Decorated with Message of Swamiji and youth Decorated with Bharat Mata.  Road Safety banners, placards and distribution of hand bills to the public. The rally congregated at the central location of Silpukhuri where a formal function was held. The function was attended by Shri Ajoy Dutta ,Ex MLA as the Chief Guest and Shri Raj Chakrabarty Chief General Manager  (NE), NHAI as the Guest of Honour. The function was hosted by Shri Chinmoy Choudhury, Solicitor- General, Assam.and Sanchalak ,Kamrup Bibhag-,Vivekananda Kendra.

Speaking on the Occasion the Chief guest appealed the youth of India to follow the path fold of Swami Vivekananda and Sister Nivedita . Shri Raj Chakrabarty ,Guest of honor highlighted the importance of the youth in nation building and the necessity of the youth to inculcate moral values and good habits to build a strong character. It was also pointed out that youth of today are the prime road users and the importance of the youth to ride safely was paramount. While safety of the self was important, it was also equally important to look after the safety of the other road users. Any accident adversely affects the family involved socially, economically and psychologically. The slogan for road safety –“ Your Safety Secures Your Family. Be Cautious on Road” was therefore very relevant.

The function resolved that all the traffic rules must be followed. Use of seat belts by car drivers and compulsory wearing of helmet by two wheeler rider and pillion is a must. Drinking and driving are mutually exclusive and must be avoided at all cost. Safety of pedestrians and other vulnerable road users was of utmost importance. Helping road accident victims within the Golden Hour by good samaritans was also highlighted.

Shri Kalyan Dutta ,Sanyojak of the National Youth Day ,while thanking every one requested to follow the Yoga and Pranayam as envisage by Swami Vivekananda .He further stressed that   Yoga and Pranayam keep the Human body and Mind in Balance status. So It helps the Driver to Drive the vehicle in a Balanced state of Mind and do not encounter accident .He appealed all road users to practice Yoga and Pranayam at least 1 hour every Day.

The function closed with a pledge to adopt road safety as a part of our daily lives so as to ensure the security of our ownselves, our family and fellow road users.
at 2:20 PM