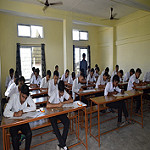 To commemorate Swami Vivekanand’s historical speech at the world parliament of religion on 11th September’1863 at Chicago,  Vivekananda Kendra Dibrugarh in collaboration with Lahowal college, Dibrugarh has celebrated Universal Brotherhood Day on 26th September’2015 by organizing a seminar on” Universal Brotherhood” at Lahowal College’s auditorium. The seminar was inaugurated by lightening the lamp by Sri. Jyoti Prasad Dutta, Principal of Lahowal College which was followed by  Vedic chanting by Vivekananda Kendra karyakarta before a well gathered audience where almost  all the students, teaching and non-teaching staffs attended. Welcome speech was delivered by Sri Jyoti Prasad Dutta, principal, Lahowal College. Key note address was delivered by Sri Keshabananda Haloi, of DHSK commerce college, Dibrugarh. The seminar is followed by a Arise,Awake- a Book based Written Quiz competition for the student of the college where 82 nos,of students participated.

Wall Magazine Competition cum Youth Convention
Vivekananda Kendra, Dibrugarh organizes a inter college Wall Magazine competition within Dibrugarh district and a youth convention for college students on 15th September’2015 in connection and continuation of yearlong celebration of “Mananiya Eknathji  Janma Sati Parva”.
The inter college wall magazine competition was based on the topic of “The story of Vivekananda Rock Memorial” on which students from different colleges within Dibrugarh district participated with great enthusiasm and exhibits their creative skills in forms of poetry, articles, pictures ,sketches etc. in a very decorative fashion.  The study materials and guidance were provided to all the participants in the competition almost one month prior to the competition during college samparka by Vivekananda Kendra karyakartas.

Inaugural Ceremony: The Wall Magazine competition was inaugurated by Dr.Subharani Sarma, Prant Pramukh of Vivekananda Kendra Assam Prant by lighting the lamp followed by vedic chanting by Vivekananda Kendra karyakartas. In her inaugural speech she appreciated the entire participant for their creative skills and emphasis on importance of youth’s power and its role for nation building citing Swami Vivekanand’s confidence on youths.

Youth Convention: Wall magazine competition is followed by a vibrant youth convention with all the 100 nos of participants of the competitions. The convention begins with Tin Onkar, Vedic Chanting and patriotic song which is followed by welcome speech by Sri Ravindranath Savdekar, the principal of VKV Dibrugarh. We also conducted games sessions, creative sessions, group discussion and interactive session on “safalata and sarthakata”, concluded by a inspiring lecture session by Dr.Subharani Sarma, Prant Pramukh of Vivekananda Kendra Assam Prant. Prize distribution ceremony and judges briefing were done at the end of the convention.

Conclusion : It was very much satisfying to see the youth’s involvement in all the sessions of the convention. The way they participated, the way they maintained discipline during the sessions, the way they express their thoughts and feeling etc, it appears to be a fruitful youth convention.  To sustain this tempo further more in a purposeful way a three days residential PDC for the participants of the convention is also decided by VK Dibrugarh to be held during the month of November’2015.
Arisie,Awake book based Written quiz Competition in different colleges. 19th September’2015,20th september’2015 and 26th september’2015.
Vivekananda Kendra Dibrugarh organizes written quiz competition on “Arise,Awake”  in different colleges  within Dibrugarh district to commemorate “Mananiya Eknathji Janma Sati Parva”. Study materials were provided to the participants prior to the competition during the college samparka activities by Vivekananda Kendra karyakartas. Details of the programs held are as below:


Conclusion:  A total number of 159 students participated from all the above mentioned colleges. A three day’s residential PDC is also proposed to be held during the month of November’15. Prizes will be declared and distributed during the PDC.
at 3:56 PM