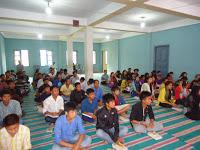 Mananeeya Eknathji Janmashati Prava, Arunachal Prant has organized Four (days) Yuva Prashikshan Shivir for the Selected Youths, who are working for the social upliftment in eastern part of Arunachal Pradesh five districts, Namsai, Tirap, Changlang, Lohit and Longding of arunachal Pradesh. Camp was conducted at Zenith Child School, Namsai, 20th to 23rd April 2015. 86 participants or karyakartas were taken participated in this camp. The main objectives of this camp were to upgrade the quality, positive direction and to inculcate patriotism, cultural value, self discipline and the attitude of Social Service, formal and informal education, health and hygiene, with the twine ideal of Vivekananda Kendra “Man Making - Nation Building” through the various sessions on yoga, lecture, concentration & memory development games and group discussion. 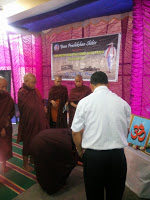 Camp inaugurated on 20th April 2015 by Chief Guest Venerable Agga Dhamma, Chief Monk of Buddha Vihar Monastery, Namsai, He said that by doing so, they will be able to strengthen their self-confidence and able to face any of life’s challenges in the future. 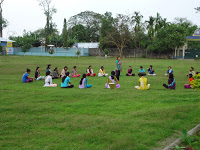 He believed that by providing youths with positive and constructive activities to occupy their time, they will be affected morally, and eventually become a better person who will one day contribute to a better society. Camp concluded on 23rd April 2015, where chief guest Shri R.K. Sharma, Deputy Commissioner, Namsai and Guest of honor Shri Sange Tashi Thungdok, ZPM Rupa addressed the participants and other invitees Karyakartas as a concluding speech.
at 2:36 PM