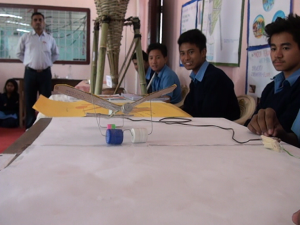 Nov 19, Itanagar:  Vivekananda Kendriya Vidyalaya Itanagar today organized Eknathji Vigyan Pradarshani 2014 to commemorate the birth centenary of late Eknath Ranade. Over 700 students participated in drawing and creative science model project competitions as part of the celebration.
Speaking to Eastern Sky Media ,Subash Chandra Dikshit, Principal of Vivekananda Kendriya Vidyalaya Itanagar informed that the event is being conducted in the memory of Late Eknathji Ranade who was the founding president of Vivekananda Kendra.

SC Dikshit stated, “Eknathji’s vision was to reach Arunachal Pradesh through education and make the state developed. Initiatially 7 VKVs were established in the year 1977 and now the numbers of VKVs has grown to 33 providing education to the children of the state.”

A science exhibition was also conducted with a motive to create awareness among the students about scientific temperament and to evaluate the models; three scientists from different departments were invited. “Ten selected models will be awarded by the school,” added Dikshit.

Further, SC Dikshit informed that a year-long programme has been scheduled for the students to commemorate the birth centenary of Eknathji which include the ‘Eknath Darshan’ depicting the life sketch of Eknathji, ‘Eknath Darpan’ which is a monthly programme where students will express their ideas through wallpaper magazines and ‘Eknath Vyakhyan Mala’ where students and teachers will have discussions every week.

SC Dikshit also opined that this event should be adopted or be taken as a reference for other schools so that students may be provided a better platform to share their scientific outlook.