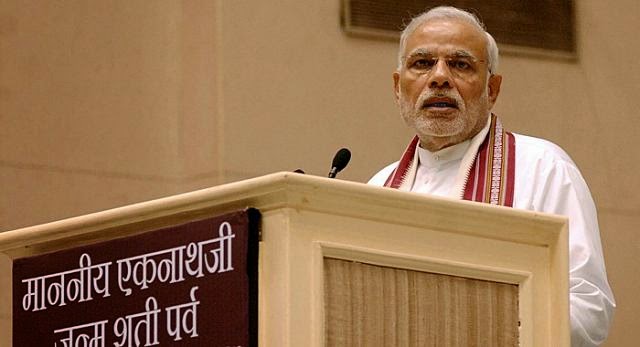 Prime Minister Narendra Modi, while speaking at an event to mark Eknath Ramkrishna Ranade’s birth centenary celebration year inauguration on Sunday, recounted his many experiences of working with the social activist and nationalist leader who had a knack for perfection.

“It is an opportunity for me to speak at birth centenary celebration of someone who has been an inspiration for me since my childhood.” This was the opening line of the PM.

Eknath Ranade (1914-1982) joined the Rashtriya Swayamsevak Sangh (RSS) while still in school. He became an important organiser and leader for the organisation, rising through its ranks to serve as its general secretary from 1956–62. Ranade was greatly influenced by the teachings of Swami Vivekananda, and compiled a book of Vivekananda’s writings. During the 1963—72 period, Ranade played an instrumental role in the construction of the Vivekananda Rock Memorial and the Vivekananda Kendra at Kanyakumari, Tamil Nadu.

“In a bid to make everyone participate in building Vivekananda Rock Memorial, Eknath ji went to everyone from common man to all Chief Ministers and Union Ministers. He inspired every citizen to participate in it. His aim throughout his life was to connect everything – past with future, different ideologies,” said Prime Minister Modi.

“Eknathji asked people to not just admire Vivekananda, but to live by his teachings,” Prime Minister further added.

Shashi Shekhar, CEO of Niti Digital, said, “It is a fact that the many selfless Institution builders who contributed to this Nation but were from outside the Congress fold or Leftist/Socialist fold have been largely unknown or ignored. With the ascent of Narendra Modi finally we are getting to learn and know more about these unsung heroes. Eknathji Ranade belongs to the generation of selfless Institution Builders. Today if we can proudly associate one landmark to Swami Vivekananda it is the Rock Memorial in Kanyakumari. Generations of Indians will be eternally indebted to Eknathji Ranade for this.”

Giving an example of how Eknath ji Ranade was simple and selfless, PM Modi said, “He built Vivekananda’s memorial which cost in millions, but he himself lived in a small hut.”
PM recounted many stories of his experience with Eknath Ranade, illustrating examples of how keen he was on ensuring that everything was perfect.

“Eknath ji always tried to turn impossible into possible. I am fortunate that I had the opportunity to be close to him,” said the PM.

Prime Minister Modi expressed hope that Eknath Ranade’s life will inspire the youth of this country to involve themselves more into building the nation.