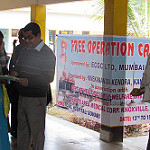 The Free Operation Camp organized by Vivekananda Kendra Kanyakumari in association with Dept. of Health and Family Welfare, Charaideo district and Remote Area Medical Corp.(RAM), Knoxville, USA concluded successfully on February 18, 2017 at Sub Divisional Civil Hopital , Rajapukhuri, Sonari. During the weeklong camp 42 patients were operated by the NRI and Indian Doctors for various diseases like Gall Bladder Stone, Appendicitis, Inguinal Hernia, Hydrocele etc.Out of them there were 25 female, 15 male and 2 pediatric patients. In OPD 107 patients were treated. 28 free Endoscopies were done by the NRI Gastroenterologist and out of them 2 were colonoscopies. Dr. Gangadhar Maddiwar, Dr.Vinayak Kulkarni, Dr.Anuradha Kulkarrni , Dr. Manoj Kulkarni and Dr. Krishna Dehpande from USA and Dr. Satish Tatawar from Chandrapur, Maharastra participated voluntarily in this camp. One ENT surgeon Dr.Archana Ranade from Apollo Gleneagles Hospital, Kolkata joined the surgical team for two days and she conducted 5 major ENT surgeries. Patients from Charaideo district of Assam and Longding district of Arunachal Pradesh got the benefits from this Free Operation Camp.

Earlier the camp was inaugurated on 13th February 2017 by the Deputy Commissioner of Charaideo district Sri Bibekananda Phukan attended by eminent personalities of Charaideo and Sibsagar districts. He thanked Vivekananda Kendra and RAM for the noble initiative to conduct such a multispecialty operation camp in this remote and sensitive border district. The Hospital Management Committee of Sonari Hospital felicitated the visiting doctors team with Assamese traditional Gamocha.

The mobile medical of Vivekananda Kendra conducted seven screening camps in various places of Longding and Charaideo for one month to find poor and needy patients for surgeries. 78 patients registered their names in these camps and out of them 42 were operated in the operation camp. Rests of the patients were medically treated.

It has to be mentioned that the Free Operation Camp in collaboration with RAM completed ten glorious years and we operated 596 patients so far without any complications.
at 3:10 PM