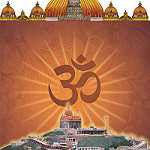 SRI RAMAYANA DARSHANAM: Kanyakumari, the junction of three seas at the Southern tip of Bharat has the landmarks (1) Devi Kanyakumari temple,2) Vivekananda Rock Memorial and  (3) the Thiruvalluvar statue.  Now a new landmark Sri Ramayana Darshanam along with BharatmataSadanam has come up in the Vivekanandapuram campus of Vivekananda Kendra at the entrance of the Kanyakumari Township.

Situated in a 3.6 acres complex, Sri Ramayana Darshanam occupies two floors of a beautiful building designed by the famous temple architect Shri K.Dakshinamoorthi& Sri. Ganeshamoorthi sons of Shri S.K.Achari the famous Sthapati who built the Kanyakumari Vivekananda Rock Memorial. The magnificent structure has got two floors of 6,000 sq. ft. each.  There is a 27 ft. granite statue of Veer Hanuman established at the entrance of the structure.  Sri Ramayana Darshanam is a pictorial presentation of modern acrylic paintings by thewell-known artist Shri. T.Baskaradass who has already established his fame by renovating the two exhibitions of the Kendra in Kanyakumari.  Sri Ramayana Darshanam presents in 86 paintings of the size 6 x 4 ft., the episodes from the Valmiki Ramayana starting from Valmiki’sTapasya and concluding with Sri Rama Pattabhishekam.

The remaining 22 panels represent the importance of Ramayana in shaping India’s value system.

Two panels represent the concept of Ramarajya as envisaged by Valmiki, Kamban and Tulasidasa.  One panel depicts the Ramayana in Samskrit,in all literary forms poetry, prose and drama. The next panel represents how the Ramayana is the most important literary work in all the Indian languages.

Two panels represent the Ramayana in the life and literature and in the still and performing art-forms in countries of Asia from Iran, Cambodia, Indonesia, Malaysia, Burma, Philippines, China, Vietnam, Sri Lanka, Thailand and Japan.

The importance of the Ramayana in the temple architecture, sculptures, bronze idols and theatre forms, cinema and T.V. are represented in the next two panels.

The power of Rama Nama and the great saints who have propagated Rama Nama through the length and breadth of the land are presented in one panel.

The Kathakars, the story-tellers hold great sway on the minds of the people, when they tell them the Rama Katha.  Their influence is presented in a panel.

Ever since Lava and Kusa sang the Ramayana, Ramayana and the art of music have become inseparable.The Ramayana musicians are represented in a panel.

Swami Vivekananda who had great respect for Sri Rama, Sita and Hanuman has made significant statements on the impact of the epic.  One panel gives a glimpse of Swamiji’s ideas on the epic.

Being the most popular epic story the Ramayana has played a significant role in Indian politics.Mahatma Gandhi, MadanlalDhingra and other national leaders were influenced by Rama Katha.  These find a summarised representation in a panel.

Modern literature owes a lot to the Ramayana.  The influence of the epic on present regional and English literatures of India is represented in a panel.

Great women led by Sita are presented in Valmiki’s Ramayana.  One panel attempts a picturisation of women in the Ramayana.

The tribal people of India have owned the Ramayana.  Their versions are presented in a panel.

The Ramayana as a representative literature of Mother Bharat equates Sri Rama with this holy land.  Sri Rama ViswaroopaDarshanam is the last panel in the series.A marble ensemble of Sri Rama Panchayatana adds to the beauty of the exhibition.

Complementing the Ramayana episodes and representing the importance of Bharatmata and Indian Motherhood during the Vedic,the Puranic and the historical periods of India, the Bharatmatasadan is designed.  It has a statue in Panchaloha of Bharatmata and fibre glass images of Sri Padmanabha, Nataraja, Swami Vivekanandaand Mother Kanyakumari.Pictures of famous Mothers, (1) Sakuntala,  (2) Jeejabai,  (3) Parasakthi (4) Yasodha, (5)Mother Sarada(6) Mata AmritanandaMayi and (7) Gaidinliu are presented as beautiful paintings.

This whole complex has been got up at an expenditure of Rs. 15 crores (land cost excluded).

A majestic and imposing idol of Veer Hanuman is enshrined in the front portion of the edifice.  The Ramayana rishis and Ashta Lakshmi’s are represented in the niches around the pictorial building.Large paintings of Gitopadesha and Sri RamalingaPratishtha are placed at the entry and exit stairs of the BharatmataSadan.

The whole complex is situated in a beautifully manicured lush green lawn overseen by a majesticfibreglass statue of Gangadhara Shiva supported by four gold-copper tinted elephants.  A Gopalakrishna statue graces the lawn.

This self-contained, fully air-conditioned and tastefully lighted complex is topped with seven huge Kalasams shining in the sun during the day and reflecting the powerful electric lights in the night.  The solar powered electric supply is has made the complex eco-friendly.

The Ramayana Darshanam, Bharat Mata Sadanam, Veera Hanuman complex was inaugurated by video conference on the 12th January 2017, the sacred Birth Day of India’s youth icon Swami Vivekananda by Bharat’s Prime Minister Honourable Sri. NarendraModi. Sage and Ramayana Kathakar Sri. MorariBapu who is conducting a Ramayana Navaham in the Vivekanandapuram beach area gave the benedictory address. He lauded the Vivekananda Kendra for its service activities and paid glorious tributes to Swami Vivekananda. He praised the Kendra for its endeavoursfor spiritual and social uplift of our country. He announced a donation of 1.25 lakhs especially for the patron scheme. The Prime Minister in his address touched a variety of subjects. The importance of Ramayana in developing an inclusive society,the ideal of Hanuman as Sewak, the greatness of Sri. EknathRanade, the founder of the Vivekananda Kendra and the importance of the Kendra’s service activities especially in the Northeastern State of India, were touched by the Prime Minister.

Kendra’s Vice President Sushri. Nivedita explained the service activities of the Kendra in detail. Shri. A Balakrishnanji, Vice President traced the origin development and the significance of the three-fold-complex of Sri Ramayana Darshanam, Sri Bharat Mata Sadanam and the Veera Hanuman statue. The President of Vivekananda KendraMananeeya P. Parameshwaranji presided over the function. Sri Pon. Radha Krishnan Minister of State for shipping and transport gave a detailed account of the developmental works carried out in Kanyakumari district. After the programme the dignitaries moved on to the Sri Ramayana Darshanam complex. Sri. MorariBapuji offered flowers at the Sri Rama Panchatyana. Sri Pon. Radha Krishnan switched on the lamp, on the Veera Hanuman statue. Swami ChaitanyanandajiMaharaj unveiled the newly painted portrait of Ma. Eknathji in the Arise Awakeexhibition. Ma. Bhanudasji, General Secretary of Vivekananda Kendra graced the occasion with his presence. Kum. Radha Devi conducted the programme, Sri. M. Hanumantha Rao and Sri K.P. Raghunathan Nair Co-ordinated the whole series of events. The function ended with Shanti Mantra and Prasad distribution. Sri Ramayana Darshanam building was tastefully lighted for the gala event.
at 3:28 PM