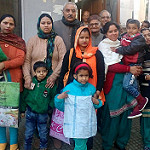 KANGRA : January 29 -  On the first day of the two day  free ENT camp  organized by Vivekananda Kendra Kanayakumari Branch Kangra today, nearly one hundred patients attended the OPD at Gopal Bagh in the outskirts of town and surgical cases were identified for tomorrow’s surgical camp.

Vivekananda Kendra, a spiritually oriented service mission with Headquarter at Kanayakumari  last year selected 21 deaf and dumb children from this hill state  below the age group of 5 years for cochlear implant surgery to be carried by Dr. Sanjay Sachdeva  and 12 of them were operated upon during the last few months successfully.

Dr. Sanjay Sachdeva, Director ENT, Head and Neck surgery Max Group of Hospitals, today here that the children born with congenital hearing loss face difficulties in communication and in learning speech with the result they have gross lack of communication skills and such children could be helped by implanting surgically cochlear implant.

He said that Cochlear implant was making children to form the productive part of the society as they behave like normal children.

He said that 100  patients were examined  and 36 audiometric tests were conducted free of cost  during the camp today by the experts from Chinmayanad Organization for Rural Development (CORD).  Speech therapy in collaboration with the CORD is being organized at Sidhbari Dharamshala.

Caption :Five children who were operated upon  for Cochlear implant free of charges in Vivekananda Kendra Kanayakumari Branch Kangra ENT Camps along with their mothers, Kendra activists and Dr. Sanjay Sachdeva at Kangra ENT OPD on Sunday January 29, 2017.
at 2:15 PM