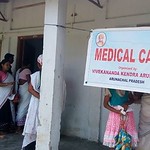 Vivekananda Kendra Arun Jyoti organized some Free Medical Camps in Namsai district of Arunachal Pradesh from 10th May to 14th May 2016.

It is to be mentioned that all the three villages under Lekang circle were flood affected and the recent flood created havoc in these areas. So, the medical camps bought relief to the ailing patients, most of them were elderly and children. Volunteers of Vivekananda Kendra, Namsai Nagar and Mahadevpur area, All Lekang Youth and Student Union (ALYSU), Adi Students Union of Lekang block joined hands with our medical team for the camps. The villagers appreciated the service provided at their doorsteps.
at 2:21 PM