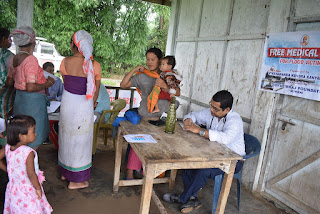 In the second week of July 2019, devastating flood severely affected many districts of Assam. Millions of people were evacuated to safer places. Their houses, belonging and paddy fields were either completely washed away or got damaged. Even some villages of Namsai district of Arunachal Pradesh were also affected. At this hour of humanitarian crisis, the Swasthya Seva Manch of Vivekananda Kendra Arun Jyoti planned to help some of the affected people by conducting Medical Camps for the flood affected areas. We have identified three remote locations, where there were certain needs. These three places are remote Amarpur area of Sadiya subdivision of Assam, Laika island of Tinsukia district and riverside villages of Mahadevpur circle of Namsai district.

To get medicines to conduct the camps, we appealed Dr. Mahesh Singhvi of Mumbai. Their organization, Hari Om Group always helps the people suffering from natural calamities and they helped us in previous occasions also. He immediately responded and helped us to procure medicines within two days.

It was really difficult to send medical team along with medicines to remote places like Amarpur and Laika as the only mode of communication is country boats and due to heavy rains and current those were not in service. So, we approached Takam Mising Porin Kebang, an apex  Mising Students body for logistic support. They responded immediately and their President of Tinsukia district Sri Beni Doley personally took the responsibility. With the help of TMPK members, local Health workers and ASHA volunteers, the medical camp was conducted on 22nd July. 256 patients were examined and medicines were distributed accordingly.

The Vistar Pramukh of Anadalaya of Sadiya area, Sri Binod Das was contacted and he took the responsibility for Amarpur area. Basic medicines like ORS, ointments, paracetamol etc. were sent to him. He along with the Anandalaya Acaryas, Health Asssitants ,Mising Mahila Samiti Members and ASHA volunteers are still camping in those remote areas. This is to be mentioned that Amarpur is a vast area with a population of nearly 12,000.

Our Mobile Medical Team conducted three medical camps in Mahadevpur area on 23rd and 24th July at Kakoni, Nongkhong and Dirak Miri villages. All these villages were affected by recent floods. For these camps, we collaborated with All Lekang Area Youth Association. 207 patients were treated during these camps.

We requested all the local organizations who collaborated with us during the camps to keep an eye on the health scenario of the villages, so that we can if needed we can do the follow up properly.
at 4:10 PM