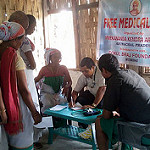 The camps were organized at Mahadevpur I, New Silatoo, Philobari and Woisali villages of Lekang circle and Menkeng Miri of Namsai circle. A total 759 patients were examined by our mobile medical team and medicines were distributed free of cost. Most of the patients were suffering from cough, cold, fever, skin diseases and various water borne diseases. Our medical team interacted with the village elders, youths and students and advised them to take special care on clean and safe drinking water during flood.

All Lekang Youth and Student Union (ALYSU) and Adi Student’s Union of Lekang block volunteers associated with the medical team for successful completion of the camps. The CDPO, Namsai also joined hands with the Arun Jyoti team for the camp in Namsai circle.

It is to be mentioned that Gokul Braj Foundation, a non-profit organization from Mumbai donated various medicines for the flood victims and these medicines were utilized during the camps in the flood affected areas.
at 3:36 PM