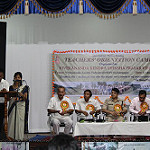 The inaugural day started with a Band Display by the 38 Assam Rifles, Arjun Company, Umrangso. Dr. Dhananjay Parashuram Ghanawat,  IPS., Superintendent of Police, Dima Hasao, was the Chief Guest. The significance  of  Attitude, Values  in  day-to-day life  which equips a student for lifetime, while knowledge and skills keep on coming with the passage of time, he opined. He underlined the role of Teachers in addition to the Parents in preparing a child in ushering a better Society. He also urged the teachers not to keep their roles confined to classrooms only but also be a role model and play as guide to  members of public. Sri  Pravin Dabholkar, Joint General Secretary, Vivekananda Rock Memorial & Vivekananda Kendra Kanyakumari,  & Secretary, Vivekananda Kendra Shiksha Prasar Vibhag, Guwahati  spoke on the importance of holding Teachers’ Orientation Camp every year.

Sri Sibnath Barman, Social Worker, distinguished guest in the Inaugural programme laid emphasis on Spirituality which once formed the core of Society.  Sri Giridhar Patowary, Executive Director, NEEPCO, Shillong, expressed  dilemma of a parent in teaching his or her  child.  Mohan Dihinga, DGM (Civil) , KHEP, NEEPCO, Umrangso  was the other dignitary present.

The sessions on Swami Vivekananda’s vision of Education, Man Making Classrooms, Use of technology in Classroom situations specially in learning languages was appreciated by the participants. The concept of Virtual Classrooms in schools also was discussed in details.

Sri Amarendra Barua, ACS.,  Deputy Commissioner, Dima Hasao, was the chief guest  for the Valedictory Programme. He hoped that the concepts given in the TOC., will benefit the participants.
at 1:06 PM