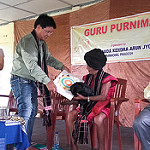 Vivekananda Kendra Arun Jyoti has Organised GURU POORNIMA BY FELICITATED TO PRIEST at Wakro on 31 July 2016. The programmed  was stated with Mishami prayer song followed by lighting of lamp. The chief guest of the function was Sri Lupalum kri chief engineer, EAST ZONE, PHED.

The programmed was attended by 95 persons  including PRI members, calsom, i care (NGO), Govt employees and Student Wakro. Sri Rominso Mam karyakarta of Vivekananda Kendra length explained the importance of Guru Poornima, the role of guru in our human life and the importance of  relationship  between the  guru and shisya in the modern society and how to preserve the age old culture and tradition of Mishami or pray for the peace of whole world.

Smt. Silotmai Chikro Saha Vyavastha Pramukh of Tezu, she  gave the brief introduction of the Vivekananda Kendra. Sri Lupalum Kri, chief guest  expressed his higher gratitude to Vivekananda Kendra for the great contribution in the field of education and for other activities in Arunachal Pradesh. He advised the students to respect their father & mother and their be love parents.He gave concentrate on the importance of goals in life and said students should set their goal in life. He keep before the student  own example, how he has became an engineer by hard work ' where there is will, there is a way.

In the programmed the oldest priest of mishmi society of  Wakro circle Shri Tadiplum Yun was felicitated by VKAJ Wakro, turban and momentous was felicitated .Sri Dominso Tayang was the guess of honer, he speak on unseen guru of mishmi priest.He told that he also a priest but yet not see them but when his guru came in him.He is become a powerful person from normal person.He also told that without guru like is useless, to live a meaningful life we need a guru in our human life.

Sri Ashok Atale Nagar Sangthak,Tezu, spoke about the  activities of Vivekananda Kendra in Lohit, Anjaw, Namsai, Lower Dibang Valley by supporting to the students for pursuit studies in different part of India and how these students are contributing energy and time for the welfare of society.

Sri Somodang Towsik an employee and writer he narrated a story on the role of priest & guru with importance of priest in the Mishami society. The programmed ended with vote of Thanks and Prayer.
at 3:12 PM