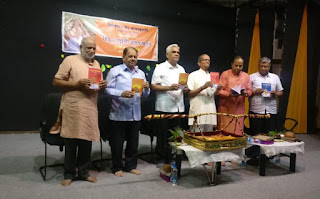 2. College Students get-together was held on 2 July in Belgavi. Subjects like Time Management, Man-making for Nattion-buliding, Social Service were discussed for inspiring the youth.

3. Compilation of articles written by Hon. Parameshwaranji, Heartbeats of Hindu Nation was translated in Marathi as हिंदू राष्ट्राची हृदय स्पंदने (Hindu Rashtrachi Hriday Spandane). Set of three books was published on 4 July in Nagapur  and on 24 July in Pune.

5. Gurupaurnima Utsav programmes were held at 47 places with 1525 participants. Knowing and accepting Dayitava was main theme. Senior Karyakartas guided Karyakartas on this subject and they took their Dayitva before Onkar.

6. 56 persons from Maharashtra attended Spiritual Retreat in Kanyakumari in August 2019.

10. As a yearly activity, during Deepawali, Nashik Branch collected sweets and other Deepawali eatables, clothes from society and distributed in 30 tribal villages adopted by Prashikshan va Seva Prakalp, Pimlplad (near Nashik). This is 31st year of this activity.