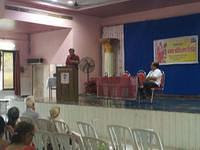 Second Declamation Training Camp (वक्ता प्रशिक्षण शिबिर) was Organized at Vile Parle, mumbai on 15th July 2012,  as a preparatory camp for 'Wake up Bharat Enlighten the world' with 55 participants.

In this Sri. Arvind KulkarniJi delivered talk on “Swami Vivekananda - Need of hour”. In that he highlighted the points that how Swamiji's life and teachings is role model for students, youth considering his concentration, curiosity, scientific approach and Rashtrabhakti. Man making education is the only solution for today's challenges. By giving examples of Swamiji life he highlighted the point that Hinduism is Nationalism.

Swamiji's Pictures was delivered by Shri. Kishor Jawale. He emphasized on fact that, we should not consider swamiji as God, and become free from our responsibilities but learn from his life, how a common man can become VishwaManav. He throw light on the concept of 'Spirituality'. Spirituality lies only in renounciation and selfless work. This session was followed by Manthan. Four groups discussed on the topics-1. Vivekananda's Childhood 2. How I like Vivekananda 3. Vivekananda- Patriotic monk  4. Vivekananda- Need of hour.


The camp was concluded by Shri. Abhay Bapat, Maharashtra Pranta Sanyojak. He told that success of the oratory lies in the character of the orator. He appealed the participants to work for स्वामी विवेकानंद सार्ध शती समारोह (150th birth anniversary of Swami Vivekananda).
at 3:24 PM