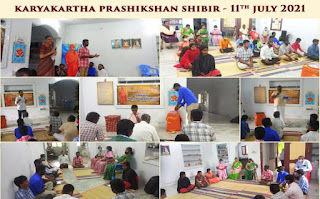 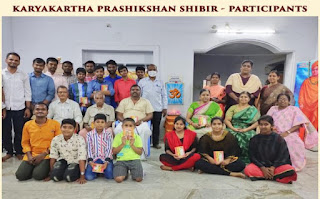 Vivekananda Kendra Madurai organised a one day non-residential Karyakartha Prashikshan Shibir on 11th July 2021 from 10.30 a.m. to 5.30 p.m. in which 22 karyakarthas participated.

The camp started with prayer at 10.30 a.m. which was followed by a brief experience sharing session and Sri. Saravanakumar ji, Shibir Pramukh elucidated the aim of the camp. Mananeeya Radha Devi didi, Dakshin Prant Sangathak gave the first session on 'Discipline in Personal and Organisational Life' in which she stressed upon the importance of observing discipline in every aspect of life.  After the session, two teams were formed and Manthan was done on “Watering the Roots” and the discussed points were summed up by Sri. Kameswaran ji, Baudik Pramukh.

In afternoon a short drama on ‘Karyapaddhati’ lead by Karyapaddhati Pramukh - Sri. Natarajan ji, songs practice, game and Kendra prarthana abhyas were there. Su. Sumitra didi, Nagar Sangathak conducted the abhyas satra for which four groups were formed and situation based questions were given for discussion and presentation. Mananeeya Sri. Hanumanth Rao ji, All-India Vice President, VRM & VK gave ashirvachan in Ahuti Satra in which he explained the real meaning of Ahuti which is surrendering one’s whole life for national work. All the participants did pushpanjali to Omkar and took sankalpa to contribute their time and energy to national work more effectively. The camp concluded with Kendra Prarthana.