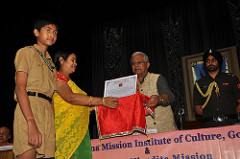 Kolkata 27th October Ramkrishna Mission Cultural Institute and Nivedita Mission jointly organized  Nivedita Smarak  speeches on the eve of 150th birth anniversary of Bhagini Nivedita. Nivedita mission organized essay writing competition in  eleven schools of Kolkata  and choose the best student from each schools. The Eknath Ranade proskar was handed over to the mothers of the students and it is the Educational equipments like dictionary, globe , geometry box pen and copies for  one year. The Pruaskar was handed over by Sri Tathagata Roy Hon Governor of Tripura. In this evening Sister Christine Proskar was also handed over to the girls for Rangoli competition.