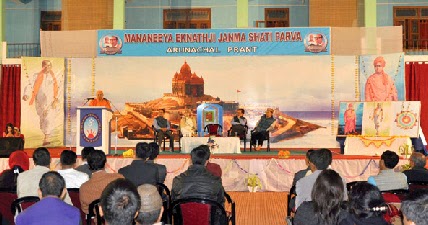 ITANAGAR, Dec 3: The birth centenary celebration of Eknath Ranade which would be known as Mananeeya Janma Shati Parva was formally inaugurated at VKV Nirjuli yesterday with the theme ‘One Life One mission.’

The centenary celebration is named as Mananeeya Eknathji Janma Shati Parva to mark the birth centenary of late Eknath Ranade, who is the founder of Vivekananda Kendra. He took up the activities of organization in Arunachal way back in 1972. The yearlong celebration started on 19th November and will continue up to 19th November 2015.
Speaking on the occasion Rinchin Dorjee, the Parva Pramukh of the celebration and former Chairman of APPSC  gave a clarion call to make celebration a successful one by spreading the message of oneness and unity .
In his address Dr. Joram Begi, Prant Pramukh of Vivekananda Kendra and former Director of Higher and Technical Education said that Eknathji was the person who translated Swami Vivekananda’s vision into action especially in North – eastern part of the country.  The state is fortunate that Eknathji chose Arunachal Pradesh to start his work. Now Vivekananda Kendra which had a modest beginning in 1977 with 7 Vidyalayas has increased to 34 in the whole state. Kendra has started Arun Jyothi for Rural development and Vivekananda Kendra Institute of Culture – Arunachal Chapter for promoting the dialogue to preserve and nurture culture.

Swami Vishweshananda, Secretary Ramakrishna Mission hospital Itanagar who attended the programme said that the mission could not fulfill the aspiration of local populace to have a school in each districts of Arunachal and that is fulfilled by Vivekananda Kendra. Dr.Tejum Padu, Saha Prant Pramukh of Vivekananda Kendra narrated his association with Eknathji and the need of meaningful celebration to consolidate and strengthen the existing system and also to reach out to the maximum people to fulfill the dream of Mananeeya Eknath Ranade.

Vivekananda Kendra has constituted committees at various levels to chalk out programmes for the yearlong celebration. Yuva Sammelan, Traditional Dance and Drama Competitions at Circle and District Level etc are some of the immediate activities planned.
at 7:35 PM