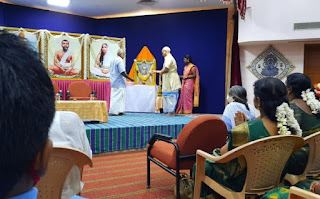 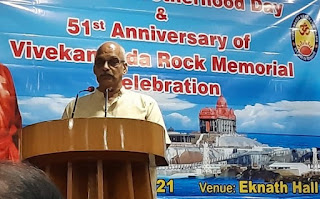 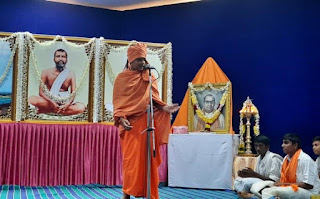 One of the most important occasions in the history of our school calender is Universal Brotherhood Day. 51st Anniversary of the dedication of Vivekananda Rock Memorial to the nation and Universal Brotherhood Day was celebrated in our school on 11th September to commemorate the historic speech of Swami Vivekananda at the “World Parliament of Religions” held at chicago, America on 11th September 1893.

The festivity started at 3.30 p.m. in the Eknath hall with the GayathriManthra followed by the lighting of the lamp by Mann. D.Bhanudasji, General Secretary of Vivekananda Rock Memorial and Vivekananda Kendra and Mann. Krishnamoorthiji, jeevanvridikaryakartha and the editor of ‘Vivekavani’. Shri. R.Manikumar, teacher invoked the blessings of the lord through a prayer song. A warm welcome was offered to all the participants by our PricipalShri.S.AbrahamLingom. Mann. D.Bhanudasji graced the function and delivered a power pact speech on the importance of the day. In his oration, he highlighted that each nation has a destiny to fulfil and we must prepare ourselves for the development of the nation. He quoted Swamiji who remarked “Each soul is pontentially divine” and instructed us to manifest the pontential divinity within us. He recalled Eknathji’s hard work and perseverance in the construction of Vivekananda Rock Memorial that stands majestically in the midst of the sea. He advised us to bring God in ourselves for the unity in the nation. He also instructed us to understand, remember, bring Swami Vivekananda in our lives, convey his rich message and play a role as good citizens of our nation. Chicago address was presented by I.Bavin of XII Standard.Some of our teachers sang a song praising the glory of Swami Vivekananda. Mann. Krishnamoorthiji also showered us with the words like pearls on this happiest occasion. He illustrated that Swami Vivekananda, “the crest jewel of India” was not a saint who lived in the past but a living legend whose words still serve as a motivation for the people. He quoted Swami Vivekananda who said, “In the future, people will not see a man as intelligent as the one who has given us Bhagavat Gita” praising the rich moral values found in it. He also referred the book “YezhuminVizhumin” where Swami Vivekananda ha instructed us to feed the starve and help him to stand on his own legs when he comes for the next time. He also advised us to bring out our hidden potentials to set forth a drastic change in the society. The staff who had completed 10,20 & 30 years of service in this service oriented organization were honoured by our dignitaries. Vote of thanks was proposed by our Vice Principal ,Smt.K.G.Sariga followed by the cultural programme of our teachers and students. The day came to a fine end with Kendra Prarthana led by Smt. S.Kalaivani, teacher. The programme was compered by Smt. T.Maheswari, teacher.