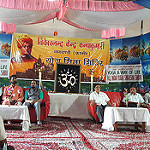 All India Yoga Shiksha Shivir (Medium- Hindi) was held at Sri Ramkrishna Mahasamelan Ashram Nagadandi under the Aegis of Vivekananda Kendra from 20 to 29 June 2016.

Nineteen  participants from Six different states viz, Andhra/, Telangana, Gujarat, Madhyapradesh, Maharastra, Rajasthan & Tamilnadu   reported on 19th and same day the Shivir started with the Introductory session, wherein the participants were given the guidlines of the Shivir.

On 20th morning, Shivir was started with inaugural lecture on “Concept of Yoga” by Mananeeya Rekhadidi, the all India Joint General Secrestary of Vivekananda Kendra.The 19 participants were organized into four different Ganas (groups) – Agastya, Kashyap, Lopamudra and Gargi – Name of the Rushies.

During Manthan Participants discussed over different Chapters from Sadhana of Service, Yam-Niyam and Bharatiya Samskriti.

The Shivir went on well in a congenial, spiritual atmosphere with self discipline.

Many of the participants have expressed their willingness to devout their time and energy for the Service of the society through Vivekananda Kendra. Few enrolled as Patrons thus joining the large family of Vivekananda Kendra.
at 2:14 PM