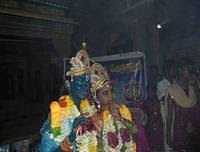 The RDP (Rural Development Programme) wing of Vivekananda Kendra organises various regular activities as well as special activities. Following is the list of activities undertaken during the above period.
Regular activities
with hygienically prepared highly nutritive lunch with vegetables was served during the day. And in the ev1.  “Sri Rama Jaya Rama” Mantra was chanted during Deepa Pooja, Shivalinga Pooja and daily by our Balwadi school children, cultural class students and during monthly meetings by our Balwadi teachers and Social Workers. Every month nearly 10, 27,654 times mantras were chanted in 84 localities.
2.  Through 76 Balwadis, 2,021 rural Children were nurtured.  In all the Balwadis, Malt along ening vitamin-rich cereals were provided to the children.
3.   In our Medicare Programme, an average of 1,843 patients were examined every month and treated for various common ailments, through 15 Rural Medical Centers in Kanyakumari, Nellai and Thoothukudi districts. 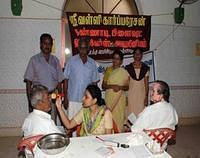 4.   Eye camps were conducted at 14 places, in Kanyakumari, Nellai and Thoothukudi districts in which 2,543 were treated for their eye ailments and 717 were operated for cataract.
5.  In 205 Samskara Vargas, 6771 students participated.  The students were taught about the values of Indian Culture, through games, lectures & lessons.  The feelings of oneness were strengthened among participants, through patriotic songs and games.
6.  Under Adopt a Grannie Programme, 23 destitute and old people were provided with monthly solatiums, in the form of rice, dhal, oil, etc., for their livelihood and 48 persons provided rice only, in Southern four districts of Tamilnadu. 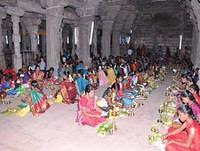 1008 Deepa Pooja at Vallioor7.  Monthly Deepa poojas were organized in 499 village temples in five districts of Southern Tamilnadu, in which 18,698 ladies participated and offered prayers for the welfare of self, family and the society.
8. Under Amrita Surabhi Scheme, our Kendra workers collected 7418 Kgs of rice from Kanyakumari, Tirunelveli, Thoothukudi and Ramnad districts.
9.  Through various branch centers, including Thoothukudi A.O. and book stalls, literature books were sold for Rs. 2,68,834 /-
10. Vivekavani Subscriptions for 501 for one year, 1 for two years, 1 for three years, 02 Life memberships were collected along with 04 Yuva Bharathi subscriptions. Also contributions were received for 135 as Patron.
11. 80 women are being benefited in 4 Self Help Groups in Kanyakumari district.
12. Swadhyaya Varga was organised, 06 places, in which 89 persons attended
13. Yoga Varga has been conducted at 10 places, in which 179 persons attended.
14. 3 tailoring units are functioning well in Nellai & Kanyakumari districts with the total attendance of 84.
15. Shivalinga Poojas were conducted at 02 places in Kanyakumari District and 199 members participated.
16. Durga Pooja was conducted at 02 places, in Kanyakumari District in which 133 devotees participated. 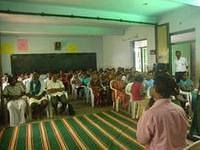 23. Jeyuthu Kattuvom for school students Programme among the students to face the problems in the exams and to improve their skill and confidence, VKRDP conducting the mass level Programme at Sankarankoil .This is coordinated by local Kendra Karyakartha Sri Sekar and the Programme was conducted with help of Shri. Krishnaswamy Tamilnadu and Kerala Pranth Sangatak and professor Kathali M.T.N College, Madurai. This was sponsored by Tangabalam Polytechnic College. In this Programme nearly 2,000 Students from 15 schools with 15 parents and 50 teachers participated. 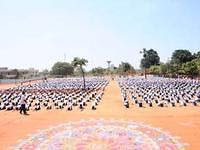 
25. The following camps were conducted at Kanyakumari by RDP for Higher Secondary School students and College students


26. Rice collected through Amrit Surabhi and Anna Pooja was distributed to Balwadi children, old poor people and the following institutions

In our balwadi, one Selvan Sanjai is studying. His parents took him to an English medium school and admitted him there. They have not informed us about the matter. Next day Sanjai wept in the new school and cried to be brought back to our balwadi. Then his parents decided to allows him to continue in our balwadi for another two years. His mother informed this to us. This incident is unforgettable for us.

On 04.11.2011, I went to Neeravi School for the cultural competition along with sister Selvarani. On the way, the bus fell down from the road. We were unable to do anything. Then, people from the nearby village came for help and the bus was erected on the road. Afterwards, the bus started. Then we reached the Neeravi School sharply at 9.30 A.M and attended the function, which is unforgettable to me.

M. Suja, Kallaveerianvilai, Eeanvilai
Asmitha aged above 2 years is studying in our balwadi. Her parents informed us that she does not mingle with any other children and does not talk with the words, mother, father, brother. Later on, she gradually learned to talk fluently with others. Her parents felt happy for the same. Whenever I went to her house, she used to talk with me. Her grandfather and grandmother praised that Asmitha has been completely changed in her behavior attitude after she joined in our balwadi which made me happy.