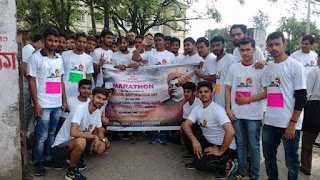 Universal Brotherhood Day celebrated at Kangra  - Marathon held KANGRA : SEPTEMBER 11 -   The self transformation among all sections of the society, particularly among the youth, was need of the hour in order to see a  transformed society  grows in days to come and the cherished dream  of Swami Vivekananda is fulfilled to have an ideal India.

Ashok Raina Vibagh Pramuk  Vivekananda Kendra Kanya Kumari Himachal Vibagh   stressed on adopting the path of righteousness shown by Swami Vivekananda to have better tomorrow for India. He stressed on the self transformation among the youths to see the dream of Swami Vivekananda  of a prosperous India  in right perspective comes true.

branch Kangra  which was attended by large number of people from all sections of the societyinculding more than one thousand youths. The registered students both boys and girls from number of schools gathered in the campus of the SDM Kangra at 7.30 am and Kendra workers distributed the T Shirts with Swami Ji's message among the registered youths.

The marathon was flagged off by  Sub Divisional Magistrate  Kangra Dharmesh Kumar Ramotra  and Visharad Chaitanya Acharya Chinmayanand Mission Tapovan from Tehsil Chowk of this town which concluded at DRPGMC Tanda.

In the boys category Arun Choudhary , Rishu Kumar and Aney Kumar all of Dhronacharya PG College Rait bagged first second and third prize in the